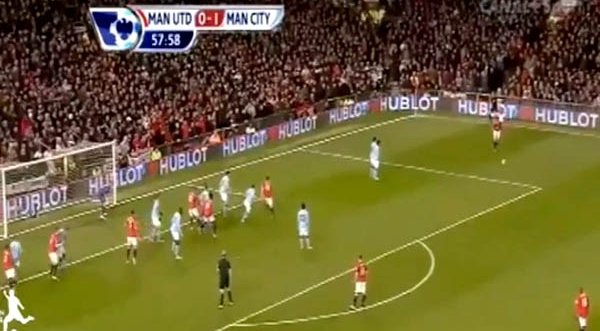 The Argentine, whose goal won City the title in May, came off the bench to score the winner after a Vincent Kompany own goal had cancelled out James Milner’s strike in an eventful second half.

The result closes the gap between the two sides to 12 points with seven games to play and, while it is unlikely to prevent the Red Devils regaining the Premier League crown, the game was still played out in an intense atmosphere.

The first half, although surprisingly open, was more notable for a series of robust challenges rather than goalmouth incidents as Wayne Rooney and Kompany were both booked for poor fouls.

Rafael did clip the crossbar after latching onto a Robin van Persie flick-on just before the interval but clear opportunities were few and far between despite the end-to-end nature of the contest.

Best of the match:

But City didn’t have to wait long to find the breakthrough in the second half and it came after good work from Gareth Barry, who robbed Ryan Giggs on the left before finding Samir Nasri in the area.

Rafael did well to tackle Nasri in the box but the Frenchman was still able to tee up Milner and the midfielder struck a fierce left-footed shot that took a slight deflection past David De Gea.

As has been a feature of their season, the goal appeared to spark United to life and the home side soon found an equaliser from the unlikely source of City skipper Kompany.

Van Persie whipped in a free-kick and Phil Jones just had to nod into the empty net but he miscued the effort badly only to strike the back of the Belgium international and see the ball diverted home.

If that was supposed to prompt a United onslaught it failed to emerge with Roberto Mancini instead looking to his bench to introduce Aguero for Nasri and deliver the game’s killer blow.

The diminutive striker showed remarkable balance to dance past a series of challenges and blast the ball into the roof of the net to stun the home crowd into silence.

Despite heavy United pressure in the final stages, Sir Alex Ferguson’s side could not find an equaliser and for the second successive season City were able to leave Old Trafford as the victors.

Mancini felt it was a deserved victory and claimed it was important his team gave a good account of themselves.

“We are happy because we played very well,” he told Sky Sports. “This is the most important thing for us. We deserved to win.”

But Sir Alex Ferguson saw it differently and claimed his United side were unfortunate not to get a result.

He told Sky Sports: “We were quite dangerous a few times on the counter-attack and we maybe could have done better, but in the second half I thought we were the better team and were unlucky to lose it.”