You can or you can’t, tips from a lousy public speaker 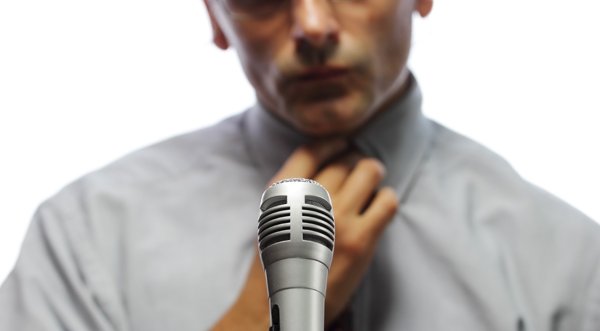 PUBLIC SPEAKING: Some of us can, others cannot

PUBLIC speaking is something you can or cannot do. The rest of us pretend to like it.

Although a public speaker for nigh on 40 years, I confess to being ill at ease when up before an audience.

Anxious speakers are not alone. Men whose occupations demand nerves of steel were wired up to test their heart rate, blood pressure and psychopathological responses to stressful situations.

One was a steel erector perfectly at ease when trotting along bare girders 1,000 feet from ground level. There was a fighter pilot and another was the celebrated mountain climber Chris Bonnington.

The tests revealed these men to be perfectly calm when engaged in situations that would frighten the life out of most of us.

These incredibly brave men were later wired up before being invited to address a live audience. On reaching the podium, their blood pressure and heart rate suggested a catastrophic stressful situation.

The reasons for being ill at ease when addressing an audience are not easily explained. Such men are used to doing so. I have friends in the world of theatre. Many concede that they get butterflies in their tummies before the curtain rises.

Politicians and members of the royal family constantly address audiences but are often ill at ease when doing so. Many cannot manage a paragraph without referring to their notes.

I have addressed audiences in most settings and cannot recall ever fluffing it. No doubt, some presentations were better than were others. I still cannot say I am relaxed about it.

Oh how I envy natural orators like the leftist firebrand Arthur Scargill and Fascist leader Oswald Mosley. Whatever one thought of their politics, they played their audience as Stradivarius played the violin.

Those of us obliged to make presentations have tricks that work for us. One of mine is to think of the audience as wallpaper. I then focus on a single friendly face and I then speak directly to that obliging person.

Notes in front of you are essential but reading from a prepared script is a one-way ticket to hell. My worst experience was my best.

I had been invited to address an audience in WashingtonDC. It got worse; the venue was situated next door to Capitol Hill and a stroll from the White House.

The audience was much bigger than I anticipated and they knew their stuff. Did I?

I was terrified as my turn to speak approached. As I took the stand and began stammering from my notes, my terror must have been evident. I knew it was going to be a polite but nightmare climax.

“Sod it,” I thought as I pushed the notes to one side. I then spoke passionately from the gut for twenty-minutes. As my nightmare ended, I closed my eyes. The hall erupted and I was besieged by a won over audience. Never again. Some are naturals; I am not one of them.