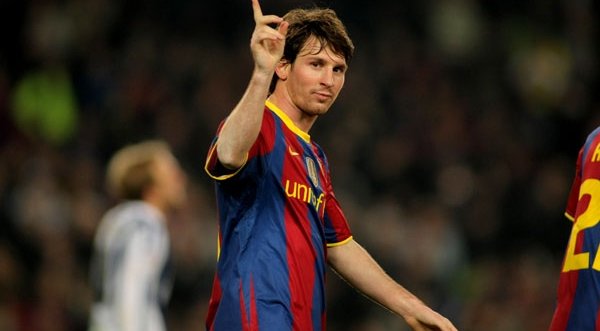 Lionel Messi returned to play for Barcelona against PSG

Barcelona fought back for a 1-1 draw with Paris Saint-Germain at Camp Nou last night on to reach the Champions League semifinals for a sixth year in a row.

Lionel Messi, who had injured his hamstring a week earlier, and was only cleared to play an hour before kickoff, came on in the 62nd minute with his team losing 1-0 after Javier Pastore’s opening goal  Huge applause greeted Messi when he went on for Cesc Fabregas.

Within nine minutes he changed the fate of Barcelona. Pedro Rodriguez said, ‘He was the catalyst. We changed after he came on and we have to thank him for that.’

PSG’s striker Ezequiel Lavezzi,was the main threat in the early stages and he forced goalkeeper Victor Valdes into action twice before the quarter-hour mark, while a long shot by Lucas sailed over the bar in the 19th.

Barcelona was limited to Andres Iniesta’s efforts and Pedro’s shot into the side-netting from a tight angle.

Lavezzi had a good chance in the 24th when Zlatan Ibrahimovic, who played well throughout the  game, put him through the Barcelona defence. However, Valdes was able to block the low shot and Pique managed to clear the rebound.

Lucas gave the Camp Nou crowd another scare with a header that Valdes saved after Ibrahimovic had picked the Brazilian out in the area. A clever run by Lucas earned Adriano a yellow card in the 42nd, giving him a one-game suspension.

Pastore put PSG ahead, before holding off Dani Alves and using his left foot to scoop the ball into the goal.

Barcelona then responded by attacking PSG’s goal with shots from Pique and Iniesta, but Messi missed his first opportunity. He soon rectified this by speeding past two defenders to pass to David Villa who then passed to Pedro who scored with a left-footed strike into the corner of the net.

David Beckham started the first leg for PSG but coach Carlo Ancelotti left him on the bench until the 83rd minute for Wednesday’s match.

Barcelona advanced on the away goals rule after its 2-2 draw in Paris last week meaning that the contest finished 3-3 on aggregate, and showed just how much the team relies on Messi against major opponents.