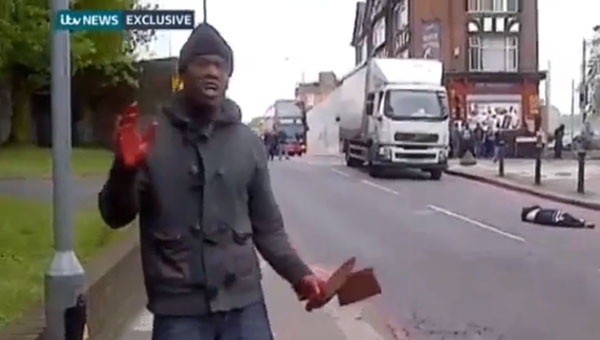 One of the attackers with blood covered hands

Two terror suspects are under armed guard in separate hospitals in London after a serving soldier was hacked to death in the street in Woolwich, in the southeast of London.

Two suspected Muslim fanatics attacked the man in the street a short distance from the Royal Artillery Barracks after knocking him down with their car. Witnesses said the men then attacked the soldier with a number of weapons, which appeared to include knives, machetes and a meat cleaver, while shouting the name of “Allah”. It is reported that they encouraged passers-by to video them.  One of the alleged attackers was filmed wielding a bloodied meat cleaver, and was heard to say, “We must fight them as they fight us. An eye for an eye, a tooth for a tooth.”

“I apologise that women have had to witness this today, but in our land our women have to see the same. You people will never be safe. Remove your government, they don’t care about you,” he said.

“You think David Cameron is going to get caught in the street when we start bussin’ our guns? You think politicians are going to die?

“No it’s going to be the average guy, like you, and your children. So get rid of them. Tell them to bring our troops back so you can all live in peace.”

A woman who confronted one of the two suspected Woolwich killers, said he told her they wanted “to start a war in London tonight.”

“And then when I went up there was this black guy with a revolver and a kitchen knife, he had what looked like butcher’s tools and he had a little axe, to cut the bones, and two large knives, and he said ‘Move off the body’.

Ingrid Loyau-Kennett, a mother-of-two and cub scout leader with training in first aid confronted the men, telling the pair to hand over their weapons and warning them, “You are going to lose.”

“I asked him if he did it and he said ‘Yes’, and I said ‘Why?’ and he said because he has killed Muslim people in Muslim countries, he said he was a British soldier and I said ‘Really?’

“I said ‘Right now it is only you versus many people, you are going to lose, what would you like to do?’

“And he said ‘I would like to stay and fight’.”

Armed police officers arrived on the scene and one of the attackers ran towards them holding two meat cleavers. One of the officers got out of the vehicle and shot both the men.  One is said to still be in a serious condition.

Photographs of the scene showed three men lying in the street, surrounded by discarded weapons and splashes of blood. Forensic officers were still on the scene on this morning and the area remains cordoned off. The car used in the attack was taken away during the night for further forensic examination.

After the attack security was stepped up at military barracks across the capital and extra officers remained on duty in Woolwich overnight.

Counter-terrorism officers are leading the investigation into the “shocking and horrific” attack.

The Prime Minister returned early from his trip to France and is preparing to meet his top advisers to address potential security risks. Eyewitness accounts reported that the attackers had political and religious motives. The Government will meet again this morning.

Meanwhile, riot police had to contain an English Defence League demonstration in Woolwich, while elsewhere two mosques were attacked. In Woolwich, a group of between 75 and 100 men gathered at a pub on where they sang nationalist songs.

EDL leader Stephen Lennon said, “Enough is enough. Our message is enough, enough. We have weak leaders. Our police, and our leaders tip-toe around this issue.

Mayor of London Boris Johnson said, “It is completely wrong to blame this killing on the religion of Islam,” he said.

“But it also equally wrong to try to draw any link between this murder and British foreign policy or the actions of British forces who are risking their lives abroad for the sake of freedom.”

The secretary of the Braintree mosque, Sikander Saleemy, said “The police said it’s too early to try and link it to what happened in Woolwich, but those of us who were here feel that it was some sort of revenge attack. It was clear from the man’s behaviour.

“We absolutely condemn what happened in Woolwich, but it had nothing to do with us.

“It was an appalling act of terror – but it wasn’t ‘Islamic’ in any way. I wish it wasn’t described like that, because sadly people will now start to blame Muslims.”

Relatives of the dead soldier are believed to have been informed but he has yet to be named.