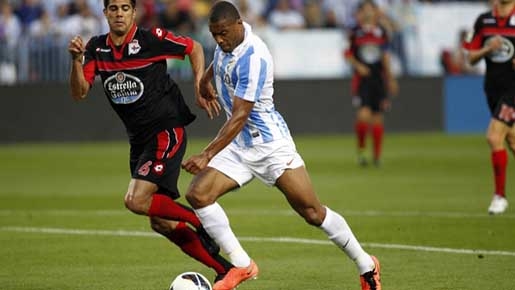 Málaga CF’s victory against Deportivo de La Coruña by 3-1 allows the Blue and Whites to qualify for European football for the second consecutive year. There was an electric atmosphere throughout the stadium for Málaga’s last home match of the season at La Rosaleda, the perfect send off for coach Manuel Pellegrini, who is leaving the Martiricos outfit at the end of the year.

The incredible atmosphere at La Rosaleda tonight was the real star of the show, as Málaga began to realise their dream of qualifying for the Europa League, and finishing in sixth place.  The match against Depor got underway with goal opportunities for both sides, however the most promising chance came for the Blue and Whites in the 9th minute following impressive play by Isco on the left wing to Baptista, who sent the ball just narrowly over the crossbar.  An immediate action from Jesús Gámez set up a good ball for Joaquín who headed the ball towards the goal, but hit the post.

Following these two opportunities for the home side, Deportivo de La Coruña tried to take over possession, although they failed to cause any real danger in the penalty area.  Juan Domínguez tried to get a goal from outside the six-yard box in minute 25, but sent the ball several metres over the crossbar.

The best chance to score in the match so far came in the 29th minute.  Julio Baptista found himself alone in front of Aranzubia’s goal, however the Depor keeper made a great save to prevent the locals opening the scoring.  Just two minutes later, Isco had a chance to net the ball, but didn’t put enough power behind it for a clean finish.  Depor were quick to retaliate with a shot from Valerón, forcing an impressive Willy Caballero save; followed by an unsuccessful header from Riki after a free kick.

During the last few minutes of the first half, Joaquín on the left wing set up an excellent chance for Saviola, who slammed the ball into the back of the net, to put the Blue and Whites in the lead by 1-0 after 45 minutes.

Depor were eager to equalise as the second half got underway, and were close to scoring with a header from Riki 10 minutes in, however he was completely off-target.  Baptista responded after a pass from Toulalan, but again a lack of strength behind the ball caused little problem for Aranzubia.

The ‘Malaguistas’ increased their lead 20 minutes into the second half with a great goal from Baptista in front of the penalty area.  The Blue and Whites were now 2-0 up and the crowd at La Rosaleda was going wild.

Joaquín looked set to make his mark on the match with a shot from 30 metres away, forcing a much-needed save from the Depor keeper.  Another chance arose for Baptista, but he wasn’t as lucky the second time round due to an overly-cautious Aranzubia.  Deportivo began to take more risks at the back in search of a goal, and Málaga were determined to increase their advantage even further.

Deportivo’s Salomao, having just joined the match, got his team on the scoreboard with a good goal that reflected off the far post and into Willy Caballero’s goal.

However Manuel Pellegrini’s men weren’t about to stop the party, and Isco worked his magic in the 80th minute to seal the Blue and Whites’ victory.  Assistance from Joaquín allowed the Benalmádena-born striker to overcome a tackle from Depor centre-forward Aythami to launch a spectacular shot from the left wing, straight into the back of the net.  The fans throughout La Rosaleda were now in a state of euphoria.

Salomao created another chance for glory following a free kick, but proved little problem for the mighty Willy.

The Blue and Whites gained three crucial points from tonight’s game allowing them to qualify for Europe next season, with just the question of sixth or seventh position in the League still to be decided.  The last match of the season against FC Barcelona will seal Málaga’s fate.

INFORMATION: 37th BBVA League match of the season, held at La Rosaleda in front of 25,180 fans.