Seven deaths in Egypt during protests 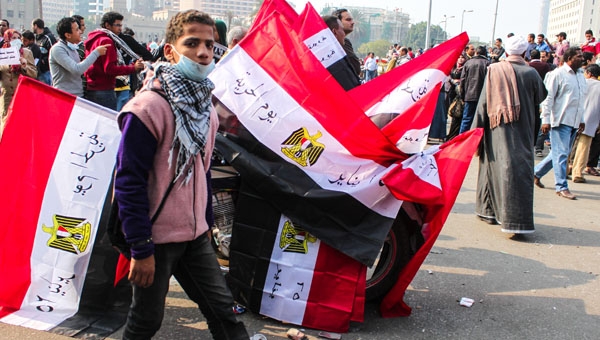 The army has announced that they will take over the country if the president, Mohamed Morsi does not stand down from office within 48 hours. Continued protests have taken place all over Egypt but mainly Cairo where Tahrir square has once again become the focal point with the tents returning and clashes between pro-Morsi supporters and those who want to see him gone. Shouts of ‘LEAVE’ are chanted outside the presidential palace and women wave shoes and display posters of Morsi with a red cross over his face.

His opponents hope to bring about a second revolution two and a half years since the overthrow of Mubarak.

There have been huge marches in Alexandria as well where a young American student was killed while taking photographs. The Nile Delta region has seen many clashes but there have been smaller protests in the holiday resorts of Luxor and Sharm el Sheikh where the tourist industry has suffered considerably during Morsi’s first year of presidency.

The British Embassy has warned tourists not to travel to the Red Sea or Sinai while the unrest continues.

The Egyptians are tired and disillusioned. The President who promised so much has done so little. There are queues for petrol, which is scarce, there is high unemployment and food prices are soaring, there is rubbish on every street corner. Homicide rates have tripled since 2011, armed robberies have risen by 1204 per cent since 2010, abductions have risen four-fold, and burglaries are up by 50 per cent. The black market for weaponry has thrived as criminals seek to benefit from the weak policing while others do not trust the state to keep them secure. Just last week, four Shia Muslims were killed by a Salafi-inspired mob in Giza. Condemnation of the murders from the MB was muted and a day later. Tourism has dropped and this has affected the country greatly as well as fears that the Muslim Brotherhood would impose strict dress code for tourists.