Spain’s Jorge Lorenzo takes the plaudits in the Netherlands MotoGP 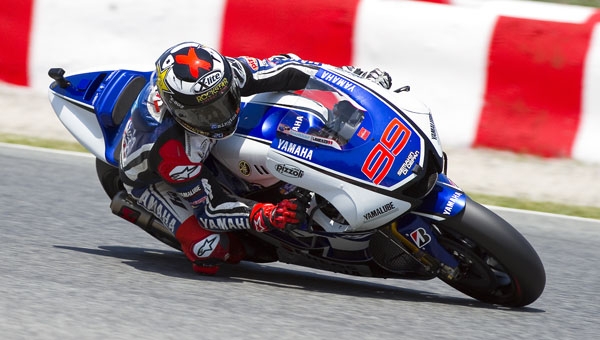 NINE-TIME World Champion Valentino Rossi may have taken the chequered flag, but real winner of the Netherlands’ MotoGP was Spain’s Jorge Lorenzo.

He may have finished off the podium in fifth, but the bravery of the Mallorcan earned the double world champion the plaudits as he crossed the finishing line despite surgery to a broken collarbone just hours before.

Lorenzo’s was a race of true grit as he had broken his collarbone 48 hours earlier. After a rapid trip to Barcelona for an operation he was back in time to take part in the race.

Such was the test of endurance he faced  – hurtling round the track at speeds which can exceed 200 mph (320kph) – that he climbed off his Yamaha after crossing the finishing line shedding tears of pain and relief.

He said: “I suffered throughout, the muscles in that part of my body felt dead. I’m happier than with any win. The tears were from the effort I put in, I don’t cry very often but I couldn’t help it today. When I fractured my collarbone, I thought that I was out for the next few races, but we scheduled the operation for the same day and then waited 24 hours for the anaesthetic to leave my body.”

The crowd knew they had witnessed something special and gave him a standing ovation for his efforts. And the result made the pain worth it as he stayed in touch in the race for the title.

He finished behind fourth placed Dani Pedrosa, the championship leader, to concede just two points in the title standings. He is now a manageable nine behind.

For Italian Rossi it was also a special result as it was his first MotoGP win in three years. He finished ahead of Marc Marquez, another Spaniard and reigning MotoGP2 champion, with rising star Cal Crutchlow, from Coventry, UK, in third.

The Coventrian was the first UK rider to take pole position in MotoGP for more than 10 years. Last to achieve the feat was Northern Ireland’s Jeremy McWilliams at the Australian Grand Prix in 2002.