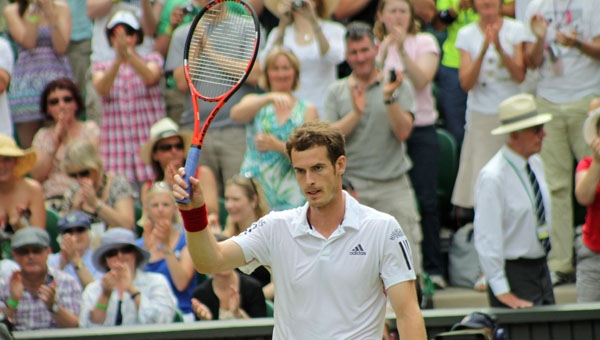 MURRAY MAGIC – I will admit that my wife and I shed a few tears (of joy) when Andy Murray was crowned Wimbledon champion last Sunday. It was an historic occasion in British sport.

At long, long last, it was a shear delight when the 26-year-old Scot from Dunblane, beat the world number one and top seed Novak Djokovic in straight sets, 6-4, 7-5, 6-4, to become the first Brit to win the men’s singles title at SW19 since the great Fred Perry in 1936.

Roared on by 16,000 fans inside centre-court, plus 5,000 extras on ‘Henman Hill’ and with millions more watching on TV, Murray – despite a few lapses in concentration and throwing away three match points, while having the occasional ‘rest’ to change two saturated shirts and down a few litres of barley-water – was outstanding.

Former champion Boris Becker said: “He was quite superb, absolutely brilliant. Some of his shots were amazing.” Sue Barker added: “He was super-human out there in temperatures topping 40 degrees Fahrenheit” while the man he beat, Djokovic, praised his opponent by saying: “From the first serve, I knew Andy was going to produce something special, and he did. A great show.” And PM David Cameron admitted: “It was a privilege to see Andy’s victory.”

LIONS ROAR – The third and deciding Rugby Union Test in Sydney ended in a crushing victory for the British & Irish Lions by 41 points to 16. Around 20,000 Brits saw the Wallabies battered into submission as the Lions claimed four tries and Leigh Halfpenny landed five penalties and kicked three conversions. This was the Lions’ first series win ‘down under’ for 16 years; great stuff.  Now let’s complete the double, by thrashing the Aussies at cricket!

FORMULA 1 – The ninth Grand Prix of 2013 at the Nurburgring, was won by championship leader by 34 points (157-123) Sebastian Vettel… the first time he has taken the chequered flag on his home track.  In a pulsating race, Kimi Raikkonen was second, Romain Grosjean third, Fernando Alonso fourth and Lewis Hamilton fifth.  The Pirelli tyres were okay this time and it’s Hungary next, on the 28 July.

ASHES TO BURN – The first Ashes Test between England and Australia started yesterday at TrentBridge, and with expectations high (for Alastair Cook’s team) it is anticipated there will be sell-out crowds for the first four days of every scheduled Test.

The former Aston Villa, Manchester United and Republic of Ireland centre-half Paul McGrath spent a few days behind bars last weekend after being arrested and charged for ‘loud and annoying behaviour’ at a wedding reception in County Offaly, Ireland. And Paul Gascoigne was found drunk and taken into police custody after an assault claim but was released without charge.

Colombia, after some impressive results in the Copa America, are now third in the world international rankings behind Spain and Germany.  England have slipped to 15th with Belgium, 10th, and The Ivory Coast, 13th, above them… and the former Manchester United goalkeeper Jack Crompton, who made more than 200 appearances for the Reds and gained an FA Cup winners’ medal in 1948 and a League Championship winners’ medal in 1952, has died at the age of 91.

EXTRAS – NH jockey Brian Toomey is still in hospital after suffering a life-threatening head injury when his horse, Solway Dandy, fell at Perth last Thursday…. in the grueling Tour de France, Team Sky’s top rider with the yellow jersey, GB’s Chris Froome, was looking strong at the start of this week as Mark Cavendish added another stage win to his long list of achievements… and Ireland’s Graeme McDowell won his third golf tournament of 2013 with victory in the French Open.