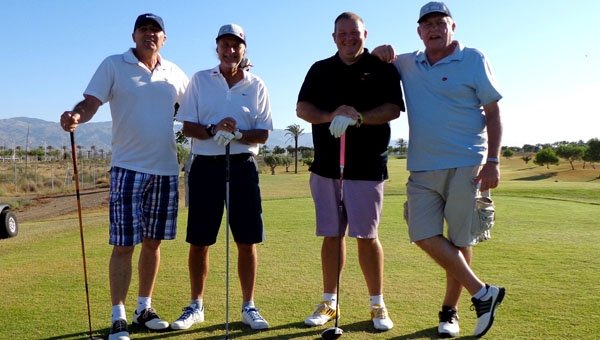 NINETY EIGHT players came to pay their respects to Steve Gilmore at Alboran Golf course by playing in a competition billed as a celebration and promotion of golf in Almeria.

As well as local golfers, friends of Steve, who tragically died during a round of golf, flew from the UK and travelled from AlicanteProvince and Murcia to be a part of the memorial tournament in his honour.

The participation of every golf course in Almeria, as well as three from neighbouring provinces, ensured the day would live up to its boast, and players from most local societies, both English and Spanish, competed for the many prizes. The enthusiastic turnout certainly has established the competition as a keenly anticipated event for years to come.

A major thank you is due to JJ Serrano of Aguilon Golf who provided extra buggies at the last minute to be sure those that needed them could travel in comfort. Despite the wind the standard was high, with players in three of the four divisions beating par and most of the nearest the pin prizes being won.

A great turnout from Steve’s Spanish friends meant that the organisers were able to arrange a mix of nationalities out on the course and, despite the language difficulty, many players walked off having made new friends.

Because of a tragedy overnight in the family of the caterers, the prize-giving had to be re-situated instantly. The officials at Alboran worked frantically during the tournament to organise a new venue; a massive task to be sure of satisfying so many hungry and thirsty players and their supporters, but one they achieved successfully.

Apart from the many prizes won during the competition there was a prize draw of scorecards which sent almost everyone home with a tangible memory of the day.

Hopefully this competition will have done what it set out to and raised the profile of an incredibly important, yet somewhat neglected asset in this part of Spain – an asset that should be contributing to the wealth of the local area.

The organisers must thank not only all of the Almeria golf courses and societies, but also the principal sponsors, Liberty Seguros and Boxers GS, and the many individuals and local businesses who contributed to the event with their sponsorship, GSF Communications, EuroWeekly News, Pitstop Garage, restaurants El Albir and AcaCharl, Building Solutions, Blue Sky Pools, Spain Property Finder, and the Costa Almeria Tourist Board, Richard Measures, Adrian Thomson, Trevor Barker and Almeria lawyer Juan Cassinello.

A collection for the British Heart Foundation produced €240 with pledges to top this up.