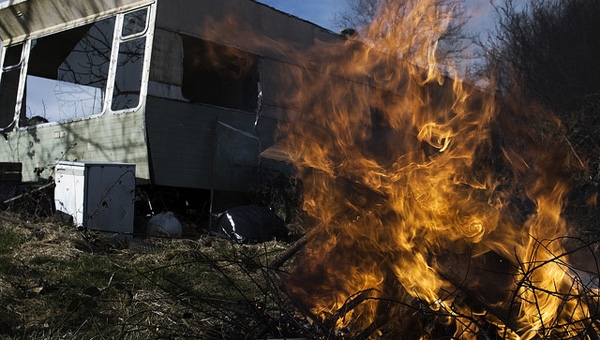 THIS weeks ‘craw lodger’ truly did make my blood boil.

It concerned the couple who, on visiting their holiday caravan, found it had disappeared. The couple were naturally distraught.

The mobile home, which they had lovingly furnished and decorated, was to be their hard won holiday escape when they reached their age of retirement.

Imagine their relief when they were informed by police that the vehicle had been located on a spare piece of ground some miles away. They duly waited for the authorities to organise its return, or be informed of where it could be picked up.

When they inquired as to why it was taking so long, the explanation was truly unbelievable. The police informed them they had no power to seize it.  Apparently, when the home had been found, it was discovered that a whole family of ‘travellers’ were ensconced.

Ok you would think. Just nick the lot of ‘em, return the property and let justice take its course. Wrong! When these occupiers were questioned, they had produced a grubby piece of paper on which was scribbled a receipt for the purchase of the caravan. The story was they had bought it from somebody in a pub.

You really couldnt make it up.

Never the less, in the circumstances the police said they were powerless to act and even though the true owners had all the relevant paper work and proof of ownership, in the light of the tatty ‘receipt’ produced by the travelling brigade, it couldn’t be proven they had actually stolen it. As there were now two parties claiming ownership, it had become a civil case and the couple could only sue the family for its return in civil court!

I don’t have to tell you what this would entail. Not only a considerable amount of money, but the possibility of years before the case was sorted. So the true owners are not only looking at someone else living in their property, even if they can afford years of crippling legal fees, there is still the chance of never getting their home back. Meantime to add insult to injury they are still obliged to pay £250 (€288) a month for two years of HP payments still owing.

Well I know what I would do. If I couldn’t live in my own property, neither would anyone else. One dark night, when they were all out getting drunk, the whole kit and caboodle would mysteriously go up in flames. Well, surely you can do as you like with your own property, can’t you?’ In the light of all the present day lunacy. Probably not!