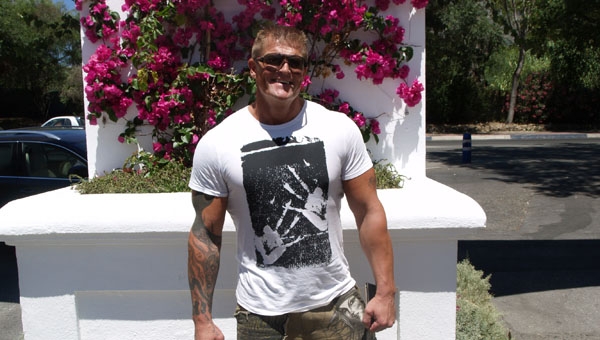 Danish actor Kim Kold, who has just appeared onscreen in Hollywood blockbuster Fast and Furious 6, has a security company in Marbella.

Kerry Sidhu met up with him to have a chat about how he managed to go from being a semi-pro footballer, to becoming a body building champ and now appearing on the big screen.

Well first of all, it’s lovely to have you here with us, and we like to go right back to the days when you started out in football. What was that like?

I WAS a semi-professional goalkeeper from the ages of 15-25 years-old and genuinely enjoyed myself. However, when I got injured, it’s like anytime for a footballer, you have to go for rehabilitation. I went to the gym that I had known for two years and where my friend and bodybuilder Thomas was. That was where my love of body building stemmed from.

Would you have gone back to football given the opportunity?

I actually did go back for nine games! The goalkeeper at the time had broken his hand and instead of asking the substitute, they asked me to come and train and fill in. Funnily, the team lost one match, drew another and won the rest! This was about four years after I had started body building, so you can imagine what I looked like on the pitch! However, I had developed a real passion for body building and was fascinated by the fact that it was something that you did on your own.

Was Thomas your major help in body building?

Yes, he showed me the right way, the right path shall we say. After one or two years of training, I had started competing in the IFBB (International Federation of Body Builders) and I won Danish, German and Nordic Championships. I had been doing it for 18 years but when I first started, I was told that I was too tall and that I would not be able to fill out my frame. I am 1.93 metres tall but I had drive and I wanted to prove everyone wrong. I was dedicated and I came back to beat them all. My last competition was in Cadiz in 2010 and I left respected and having really enjoyed that part of my career.

How did this all then lead on to acting?

In 1999, I had already done a Danish Sci-fi film which was with Danish actors. I never wanted to progress any further. I was very into my body building during those years. When I was in the gym in late 2006 early 2007, a poster caught my eye asking for a body builder, “the biggest of the biggest” and I thought well why not, I am! So I went to the casting and got through. I all of a sudden became very aware that I was camera shy so I tried to avoid the call-backs. Mads Matthiesen had to calm me down and in the end I did the film Dennis. It went viral, and then with the same man in 2010, the film Teddy Bear was made. That was the film that made it to world festivals such as Sundance.

Tell us about being in Fast and Furious 6 with Vin Diesel..

Making a movie has its ups and downs but making a movie like that was brilliant. I had auditioned for one part but ended up playing a bigger one. When I arrived, I had to hire an agent and I was told to get in touch with who seemed like the best at the time. She was international and had many contacts. However, when she realised that I had this part, she wanted 20 per cent of my profits. I made it very clear to her that the contract did not say that if she arrived after I had the part that she was entitled to anything, so after she became persistent, I fired her.  It was a difficult decision but it was something that I did not need.

However, working with actors like Vin Diesel, who I became really good friends with, made it all worthwhile. He advised me on so much. All of the actors were so normal, down to earth and relaxed. I was really positively surprised.

It really is the dream of every guy. To play an action man is something I never thought I would ever do but I have done it and I would love to do it again.

I believe that everything happens for a reason and now I am looking forward in life. I did everything the right people told me to; I mean come on, who would not accept the advice of Vin Diesel!

Of course! So what are your plans for the future?

Well, I have a daughter from a previous marriage who has just made me a grandfather. So, my Swedish girlfriend and I, with Claudio, have plans in the pipeline that will be taking us to London.  I have had television offers from Denmark and also some film offers, I will have to see what happens. If I take on the TV offer, it will be to dedicate the money to charity – foster homes to be precise.

What will happen to your security company here in Marbella if you leave for London? I know that you are a trained locksmith….

Yes I am, that was something way before even my football days! I have been a bouncer and have had the security company now for five years. The private protection company has dealt with big names like Flo Rida, Chip Munk and many famous English soap opera names. We will just have to see what happens. I cannot say yet.

Do you have any pets that will be accompanying you to London?

Yes! Our French bulldog and pit-bull will have their passports ready!

Thank you so much for giving this interview, it was great meeting you and all the best for the future.