Spain draws 2-2 against Chile in a tense friendly 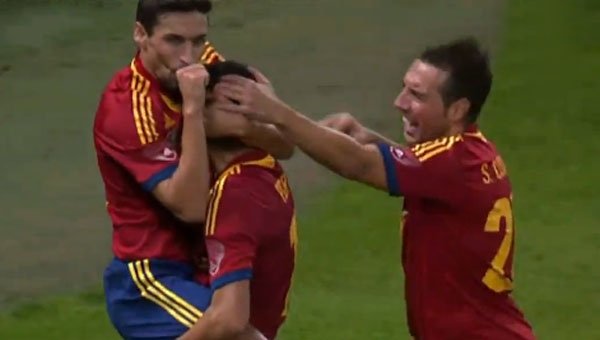 GENEVA (AP) — Goals by Roberto Soldado and Jesus Navas helped world champion Spain to come from behind twice to draw 2-2 against Chile in a friendly on Tuesday.

“We had to rely on our ability to fight back and our quality,” Navas said.

Eduardo Vargas beat the offside trap and fired home a stinging shot for Chile’s opening goal in the fifth minute.

Soldado met an overhead cross from Pedro Hernandez to equalize with a header in the 38th minute.

Vargas doubled his tally in the 44th after racing through, leaving Spanish defenders Alvaro Arbeloa and Raul Albiol behind.

Navas leveled in injury time, finishing off a three-man move after Alvaro Negredo picked out Pedro, who steered an inviting ball across the goalmouth.

Valdes got a hand to Vargas’ shot, but was unable to stop finding the back of the net.

Pedro replied with a powerful left-footed shot just wide of the post four minutes later, but Chile could have doubled its lead in the 24th when a mix-up in Spain’s defense allowed a cross to almost reach forward Alexis Sanchez alone in front of goal.

Soldado’s equalizer came when he rose to a pinpoint-accurate overhead cross by Pedro to hit a header that bounced off Chilean goalkeeper Claudio Bravo.

Cesc Fabregas just missed an opportunity to give Spain the lead when he hit the woodwork in the 42nd minute.

The second half began with Andres Iniesta substituting Fabregas, a change that settled Spain’s midfield and rapidly led to left winger Santiago Cazorla forcing an athletic, leaping save from Bravo in the 47th minute. Pepe Reina came on for Valdes in Spain’s goal.

Ignacio “Nacho” Fernandez made his international debut for Spain when he came on for Sergio Ramos in defense in the 59th minute. Alvaro Negredo then substituted Soldado in the 65th.

“Little by little we are making a larger group,” said Spain coach Vicente del Bosque of the new players he introduced, adding that his team slowly wore down a Chilean side that had started powerfully.

“The wear and tear on Chile led to a draw, although they applied excellent pressure.”

Sanchez missed a chance to stretch Chile’s lead to three in the 76th minute when his header went just wide.

Navas, who came on for Xavi Hernandez, forced a low, diving save from Bravo in the 77th, and Negredo failed to connect with a cross when he was alone in front of goal in the 86th minute. Bravo dove to save a shot on target by Pedro four minutes later.

Jordi Alba and Negredo both scored Friday to give Spain a 2-0 win over Finland in a World Cup qualifier, edging the defending champions toward a berth in Brazil.

That win gives Spain a three-point lead over closest rival France in Group I.

Spain’s next match is at home against Belarus on Oct. 11.