US pauses on 9/11 to pay tribute to victims 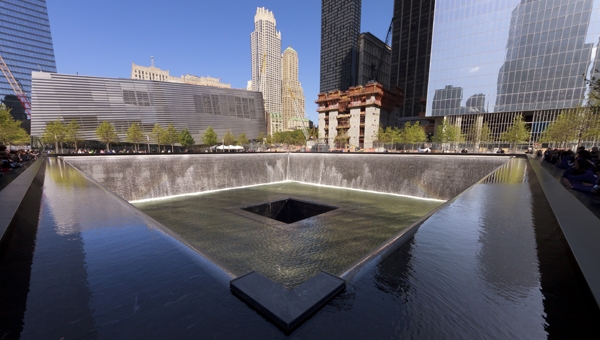 NEW YORK (AP) — As bells tolled solemnly, Americans marked the 12th anniversary of the Sept. 11 terrorist attacks on Wednesday with the reading of the names, moments of silence and serene music that have become tradition.

At a morning ceremony on the 2-year-old memorial plaza at the site of the World Trade Center, relatives recited the names of the nearly 3,000 people who died when hijacked jets crashed into the twin towers and the Pentagon and near Shanksville, Pa. They also recognized the victims of the 1993 trade center bombing.

In Washington, President Barak Obama, joined by first lady Michelle Obama, Vice President Joe Biden and wife Jill Biden, and members of the White House staff, walked out to the White House’s South Lawn for a moment of silence at 8:46 a.m. — the time the first plane struck the south tower in New York. Another jetliner struck the Pentagon at 9:37 a.m.

“It is an honor to be with you here again to remember the tragedy of 12 Septembers ago, to honor the greatness of all who responded and to stand with those who still grieve and to provide them some measure of comfort once more,” Obama said. “Together we pause and we give humble thanks as families and as a nation.”

A moment of silence was also held at the U.S. Capitol.

At the site in lower Manhattan, friends and families silently held up photos of the deceased. Others wept.

“Twelve years is like 15 minutes,” said Clyde Frazier Sr., whose son Clyde Frazier Jr., died in the attack and whose remains were never found. “Time stands still because you love your child, you love your son. … Nothing changes except he’s not here. It takes a toll on your body. You still look like you, but inside, you’re a real wreck.”

Bells tolled to mark the second plane hitting the second tower and the moments when the skyscrapers fell. Near the memorial plaza, police barricades were blocking access to the site, even as life around the World Trade Center looked like any other morning, with workers rushing to their jobs and construction cranes looming over the area.

“As time passes and our family grows, our children remind us of you,” Angilic Casalduc said of her mother, Vivian Casalduc. “We miss you.”

Bill McGinly read the name of his son, Mark Ryan McGinly, and said he missed him every day.

“We will spend the rest of our lives fighting this terrible terrorism, this evil terrorism,” he said.

The anniversary arrived amid changes at the Flight 93 National Memorial in Shanksville, where construction started Tuesday on a new visitor center. On Wednesday, the families of the passengers and crew aboard United Flight 93 recalled their loved ones as heroes for their unselfish and quick actions. The plane was hijacked with the likely goal of crashing it into the White House or Capitol, but passengers tried to overwhelm the attackers and the plane crashed into a field. All aboard died.

“In a period of 22 minutes, our loved ones made history,” said Gordon Felt, president of the Families of Flight 93, whose brother, Edward, was a passenger.

In New York, loved ones milled around the memorial site, making rubbings of names, putting flowers by the names of victims and weeping, arm-in-arm. Former Gov. George Pataki, New Jersey Gov. Chris Christie and others were in attendance. Continuing a decision made last year, no politicians will speak, including Mayor Michael Bloomberg, who was watching the ceremony for his final time in office.

Over his years as mayor and chairman of the National Sept. 11 Memorial & Museum, Bloomberg has sometimes tangled with victims’ relatives, religious leaders and other elected officials over an event steeped in symbolism and emotion. But his administration has largely succeeded at its goal of keeping the commemoration centered on the attacks’ victims and their families and relatively free of political image-making.

Memorial organizers expect to take primary responsibility for the ceremony next year and say they plan to continue concentrating the event on victims’ loved ones, even as the forthcoming museum creates a new, broader framework for remembering 9/11.

Douglas Hamatie, whose 31-year-old cousin Robert Horohoe worked for Cantor Fitzgerald and died on 9/11, said the day should become a national holiday.

Around the world, thousands of volunteers have pledged to do good deeds, honoring an anniversary that was designated a National Day of Service and Remembrance in 2009.

By next year’s anniversary, the museum is expected to be open beneath the memorial plaza. While the memorial honors those killed, the museum is intended to present a broader picture of 9/11, including the experiences of survivors and first responders.

“As things evolve in the future, the focus on the remembrance is going to stay sacrosanct,” memorial President Joe Daniels said.

The organizers expect they “will always keep the focus on the families on the anniversary,” Daniels said. That focus was clear as relatives gathered on the tree-laden plaza, where a smaller crowd gathered — only friends and family of the victims were allowed.

Denise Matuza, who lost her husband on Sept. 11, said people ask her why she still comes to the service with her three sons.

“It doesn’t make us feel good to stay home,” she said. Her husband called after the towers were struck. “He said a plane hit the building, they were finding their way out, he’d be home in a little while. I just waited and waited,” she said.

“A few days later I found an email he had sent that they couldn’t get out.”