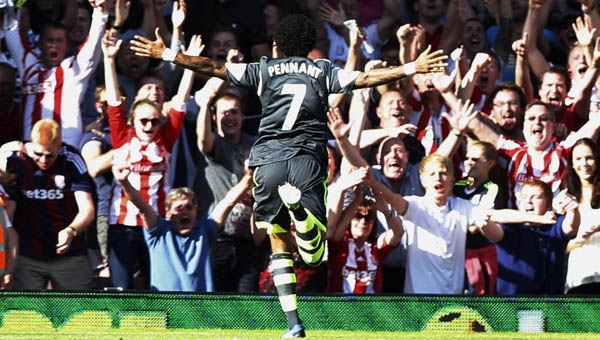 LONDON (AP) — Used affectionately by supporters of Premier League club Tottenham but hurled back by rivals with venom, football chants featuring “Yid” have long been a source of ambiguity in England.

Now football leaders, striving to eradicate anti-Semitism at matches, have taken on the thorny issue.

Whatever the context, using the derogatory term for Jews in chants is not acceptable, and using it risks criminal prosecution, the English Football Association has ruled.

“The FA would encourage fans to avoid using it in any situation,” the organization said in new guidelines published online.

In response, Tottenham announced Wednesday it is launching a wide-scale consultation on how to deal with the issue.

Fans of Tottenham, which has traditionally drawn a large fan base from the Jewish communities in London, have been calling themselves the “Yid Army” for decades.

But the “call to arms” — as Tottenham sees it — has muddied complaints when its fans face abuse.

“We are acutely aware of the sensitivity of this issue,” Tottenham said in a statement to The Associated Press. “Our fans historically adopted the chant as a defense mechanism in order to own the term and thereby deflect anti-Semitic abuse. They do not use the term with any deliberate intent to cause offence.”

English football’s governing body recognized in its announcement that Tottenham fans have adopted variants of “Yid” as a “badge of honor” without intending to cause offense.

“Nevertheless, its use is still liable to cause offence to others, whether Jewish or not,” the FA said. “Also, by using the term in this manner, fans may be clouding the issue by making it harder to differentiate its use by these fans and by those who use the term in an intentionally offensive manner.”

While acknowledging that “Yid” is derived from the Yiddish word for a Jewish person, the FA said in England the word has always been “derogatory and offensive” and its use even divides opinion in the religious community.

Offenders are liable to be prosecuted and handed a lengthy ban from attending matches.

The FA declined to say why it issued the guidelines, but they come after Tottenham fans faced abuse last season both at home and abroad.

During a Premier League match, some West Ham fans were heard chanting about Adolf Hitler and hissing, a gesture widely seen as imitating the sound of the gas chambers used during the Holocaust. The FA took no action against Tottenham’s London rival.

At a Europa League match in Rome, Lazio fans hurled anti-Semitic chants at the visiting Tottenham fan base, leading to the Italian club being sanctioned by UEFA.

“Our fans have themselves engaged in this debate (about the ‘Yid’ chants) following the events of last season,” the Tottenham statement said. “We recognize that this is a complex debate and … we are already in the process of engaging with our fans and shall be consulting more widely in due course.”

The Tottenham Hotspur Supporters’ Trust said it will seek legal advice about the new FA directive to assess whether fans could be thrown out of grounds.

The group maintains that “no Spurs fan uses the term in a malicious way.”