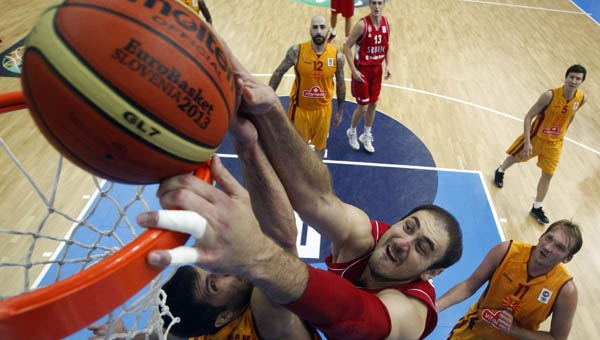 LJUBLJANA, Slovenia (AP) — Forward Renaldas Seibutis scored 15 points and Lithuania shut down Tony Parker to beat France 76-62 at the start of the second round of the European basketball championships.

France, although loaded with NBA players, could not cope with Lithuania’s speed and fell behind by 10 midway through the third quarter.

Center Jonas Valanciunas of the Toronto Raptors added 13 points on 6-for-6 shooting from the field to go with six rebounds. He had a dunk, then grabbed an offensive rebound and put in the tip-in to give Lithuania a 14-point lead with less than three minutes to go.

Seibutis made four straight free throws and France could not come back.

“The plan was to do everything to stop him. Not only his scoring but his ability to create movement,” Valanciunas said.

France finished the first round as the tournament’s top scoring team but was held well below its 80.6 points-per-game average. Lithuania played tough perimeter defense, holding France to just 24 percent shooting from three-point range.

“We tried to get the ball inside but they closed down everything and when you don’t make shots from the perimeter it gets to be difficult,” France forward Boris Diaw said.

With Serbia up by two, Markovic nailed a 3-pointer and then sank two free throws to give his team a seven-point lead with less than two minutes remaining.

Serbia held on to win over a team considered an underdog and took a big step toward securing a slot in the quarterfinals.

“Maybe we were a little relaxed going into the match because we knew that we already had four points (in the standings),” said Serbia’s captain Nenad Krstic, who led Serbia with 17 points.

Belgium opened the game with an 8-0 run and the Serbs had to work hard to catch up.

“Maybe we didn’t expect them to start in such a way,” Serbia coach Dusan Ivkovic said.

Markovic finished with 15 points on 5-for-6 shooting from the field. Bogdan Bogdanovic added 12 points, including a 3-pointer that made it 73-67.

Serbia, the youngest team in the tournament with nine players making a debut at a major event, is now 3-0. Results against other teams which progress from the group stage are carried over, and Serbia already had wins over Latvia and Lithuania. Belgium is 0-3.

“We gave a statement tonight why we are in the second round. I hope people appreciate our effort,” Belgium coach Eddy Casteels said.

Wen Mukubu, who led Belgium with 16 points, said: “They made the big shots at the end and that made the difference.”

The Latvians made 15 of 29 3-point attempts, while Ukraine hit only 3 of 16. Latvia’s shooting percentage for the game was 58.6 percent, while Ukraine shot 29.5 percent.

“They dominated every facet of the game,” Ukraine coach Mike Fratello said. “To lose by 34 is an embarrassment for everyone in the locker room.”

Kristaps Janicenoks led Latvia with 14 points, and Martins Meiers had 11 points and 10 rebounds. Sergii Gladyr was the only Ukrainian player to score in double figures with 12.

Ukraine won four of its five group games but came up short against Latvia’s speed. Latvia and Ukraine both have 1-2 records, while France and Lithuania are 2-1.