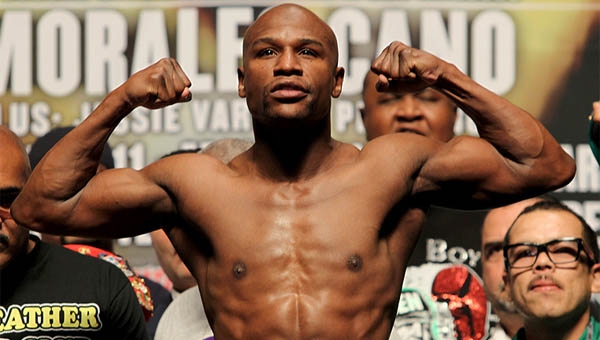 LAS VEGAS (AP) — By now, most people who care know as much about Floyd Mayweather Jr. as they’ll ever need to know, thanks to the reality TV shows he stars in for every big fight.

There’s the fleet of exotic cars in three different cities, and the mansion where Mayweather and his entourage hang out. Rappers and other boxers drop in occasionally, and on payday Mayweather hands out stacks of $100 bills to the considerable number of people in his employ.

It’s big, flashy, and about as real as reality TV gets. But as Mayweather prepares for Saturday night’s fight against undefeated Mexican star Canelo Alvarez, we’ve learned even more.

So here’s a few tidbits about Mayweather you may not have known:

— He likes cheeseburgers. At 3 in the morning on the Las Vegas Strip, he and the posse can often be found throwing a few down at Fatburger.

— He gets sad sometimes watching kids box in his gym when his sons have no interest in the sport. “Does that hurt me?” he asks. “Absolutely.”

— He can lose at the sports book. Mayweather loves to post pictures on Twitter with six-figure wins on his bets, but acknowledged this week he lost a big bet Monday night on the Houston Texans.

— He can name every car on duPont Registry, his favorite online shopping site. He owns many of them, almost all in white and in fleets at homes in Las Vegas, Miami and Los Angeles.

— He spends big money, sometimes as much as $200,000, for handbags for his female friends. Then he buys them something called Baginizers to make sure everything inside is organized.

— He’s in business with a Chinese company that manufactures his The Money Team apparel. His business partner is named China Mike “because everybody’s got to have a nickname.”

Mayweather has a nickname, too, though it’s different than the one he had when he first started boxing professionally 17 years ago. He was Pretty Boy Floyd then, before America discovered him as the villain they would pay to watch and before he had the cars and the mansion on a golf course.

He’s Money May now, and he’s the highest paid athlete in the country. On Saturday night he’ll make at least $41 million to fight Alvarez, bringing his take for the year in two fights to a whopping $73 million.

That’s a lot of cheeseburgers, and a lot of handbags. But Mayweather earns it because he has delivered wins in all 44 of his fights. People who don’t like him will pay to see if he’ll lose, and his fans will reach into their pockets to cheer him on for another win.

The pay-per-view will cost a record $75 this time, leading promoters to boast that this could be the richest fight ever, surpassing the 2007 bout between Mayweather and Oscar De La Hoya. That may or may not happen, but the idea that Alvarez might be the one fighter with the stuff to finally beat Mayweather has made this one of the most anticipated fights in years.

Mayweather was a less-than-fashionable 37 minutes late to the final prefight press conference Wednesday at the MGM Grand hotel casino, not that it mattered. It was such a low-key affair that even those on the dais seemed to want to be somewhere else.

“I’ve been here before. I know what it takes,” Mayweather said. “I was born to be here, born to be at this level.”

Oddsmakers make Mayweather a 2½-1 favorite against Alvarez, the 23-year-old redhead who is Mexico’s biggest sporting hero. He’s undefeated in 42 fights, but the level of his competition is nowhere near that of Mayweather and he will be fighting at a catch weight of 152 pounds, 2 pounds below the 154-pound mark where he holds his title belts.

Mayweather’s whopping guarantee is made possible by pay-per-view sales, and ringside seats that sell for $2,000. Still, promoters say they hope to get near the 2 million mark from pay TV,, helped largely by the Hispanic market backing Alvarez.

In the end, though, it is Mayweather who is the star of this fight, just as he has been for almost every fight of his career.

“I feel like I’m the last of my breed,” Mayweather said. “I earned it the hard way.”

Share your story with us by emailing [email protected]eeklynews.com, by calling +34 951 38 61 61 or by messaging our Facebook page www.facebook.com/EuroWeeklyNews