Nintendo to realease Wii Karaoke U 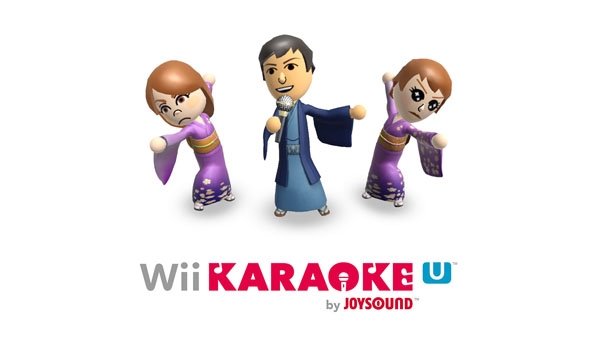 Whether you are vying to be recognised as one of Europe’s best singers, or simply enjoy a private sing-along with friends at home, prepare to give your vocal chords a workout when Wii Karaoke U by JOYSOUND launches for Wii U on 4th October as a free download on Nintendo eShop(i).

Wii Karaoke U by JOYSOUND is a karaoke application with a formidable song catalogue, featuring a launch line-up(ii) of 1500 songs by some of the world’s most recognised artists, and spanning a wide range of musical genres. The application brings the classic Japanese karaoke box experience to your home, putting the music choice literally into the palm of your hands via the Wii U GamePad, which acts as the catalogue to browse songs and create playlists, as well as doubling up as a microphone(iii).

To fully enjoy Wii Karaoke U by JOYSOUND, you must have a broadband internet connection when playing the application. In addition, getting started will require purchasing a one hour (GBP 1.79), 24 hour (GBP 4.49), or 30 day ticket (GBP 13.49) – via an in-game ‘Ticket Purchase’ icon linked to Nintendo eShop – in order to perform songs from the extensive online catalogue, while users without a ticket can still open the application and browse songs, build playlists, and customise in-game features. However, as a promotion from launch, and for those wanting to get to grips with Wii Karaoke U by JOYSOUND before buying a full ticket, a free one hour trial ticket(iv) will be available to redeem via Nintendo eShop after the application has been downloaded.

As an application intended for both karaoke veterans and novices alike, Wii Karaoke U by JOYSOUND offers three different scoring modes outside of the regular karaoke setup, plus a Karaoke Battle mode whereby up to 10 friends divided into two teams can compete face to face in a ‘sing-off’ over a pre-defined number of rounds. In the Standard Rating mode, at the end of each song a user will receive a score out of 100 based on how close the performance was to the original song. Meanwhile, in the In-Depth Rating mode, users receive a detailed breakdown of their performance, focusing on the six different areas of melody, timing, smoothness, technique, vibrato, which refers to the slight up and down modulation of pitch when sustaining a long note, and glissando, which is the technique of starting a new line by singing the note just below the one shown, slightly before it begins.

The third mode, Online Rating, is where the competitive aspect begins! In this mode, users are scored in the same way as the In-Depth Rating mode, but each performance of any song in the catalogue is compared to other users around Europe who have sung that same song. With your current ranking flashing up during key points of the song, including your final rank – plus score – for the whole performance at the end, you can see how you fare against fellow performers across Europe. If you do reach the hallowed position of the top three in an overall ranking for a particular song, you will be displayed in a league table visible to all users across the continent. But make sure to use the Miiverse button on-screen to capture your position and show it off to friends on Miiverse while you can – with the ranking system ongoing you never know for how long you’ll remain in that position!

Whilst you sing, your Mii character takes centre stage on-screen, with users able to customise the environment in which they perform. Aside from a recording studio setting, you can select your Mii to perform in an Arena, a Festival, or a Club, with the ability to personalise everything from the colour of the speakers to the smoke effects mid-song. Also fully available from launch will be an array of costumes to deck out your Mii in clothing which may reflect the genre of your playlist or simply your musical tastes.

Prepare to test your vocal chords against other singers across Europe or simply enjoy the classic karaoke box experience at home with friends when Wii Karaoke U by JOYSOUND launches for Wii U on 4th October as a free download on Nintendo eShop. With an initial launch line-up of 1500 songs, get ready to have an entire song catalogue in the palm of your hand via the Wii U GamePad!

(ii) Regular updates are planned to increase this song catalogue after launch.

(iii) Compatible USB microphones can also be used with the application.