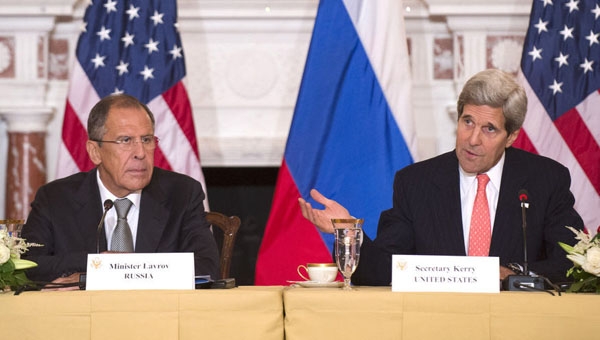 U.S. Secretary of State John Kerry said Washington and Moscow reached agreement Saturday in Geneva, Switzerland, outlining how to identify and take control of Syria’s chemical weapons. The plan requires Syria to turn over an accounting of its chemical weapons stocks within a week, The Washington Post reported.

Kerry said the pact would be reinforced with a U.N. resolution calling for possible sanctions if Syria fails to comply.

“I welcome the progress made between the United States and Russia through our talks in Geneva, which represents an important, concrete step toward the goal of moving Syria’s chemical weapons under international control so that they may ultimately be destroyed,” Obama said in a statement released Saturday by the White House. “This framework provides the opportunity for the elimination of Syrian chemical weapons in a transparent, expeditious, and verifiable manner, which could end the threat these weapons pose not only to the Syrian people but to the region and the world. The international community expects the Assad regime to live up to its public commitments.”

Obama said the United States will keep working with Russia, Britain, France, the United Nations and others “to ensure that this process is verifiable, and that there are consequences should the Assad regime not comply with the framework agreed today. And, if diplomacy fails, the United States remains prepared to act.”

The first inspectors would arrive in Syria in November, Kerry said, and destruction of the weapons would begin in 2014.

In talks between Kerry and Russian Foreign Minister Sergei Lavrov, Russia had said negotiations could not be held under threat of a U.N resolution authorizing a military strike on Syria. Russia has also pushed for assurances Syrian President Bashar Assad would not be referred to the International Criminal Court on war-crimes charges.

In a joint news conference with Lavrov, Kerry pointedly addressed the Syrian leader.

“There can be no room for games,” Kerry said. “Or anything less than full compliance by the Assad regime.”

Both Lavrov and Kerry said a U.N. resolution authorizing military force would be sought if Syria failed to comply with the agreement.

Russia has not agreed on the possible number of chemical weapons sites in Syria, The New York Times reported. U.S. officials believe the Syrian government has 45 such sites, and if Russia were to agree with that number, it would suggest Syria was to blame for the gas attacks on civilians, the report said.