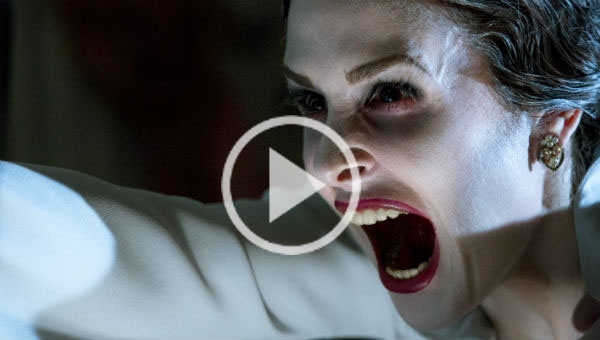 Three years after “Insidious” introduced moviegoers to the Lambert family and its troubling connection to the spirit world, the stars and filmmakers have reunited for another installment. “Insidious: Chapter 2” picks up where the first story ended, but the sequel has enough scares, laughs and a story of its own to stand alone.

Like its 2010 predecessor, “Insidious 2” is a haunted-house tale with supernatural elements. The typical horror-movie tropes are at play here: Creaky doors, creepy apparitions and long, dark hallways explored by flashlight. There’s also a haunted piano that repeats the same eerie melody and an outrageously loud and colorful baby walker that spontaneously lights up and moves around.

Patrick Wilson and Rose Byrne return as Josh and Renai Lambert, well-meaning parents who moved into a new home after fearing their last one was haunted. Their eldest son, Dalton (Ty Simpkins), has recovered from a mysterious coma (a reference to the first film), but he’s still plagued by nightmares. He doesn’t just see dead people; they want something from him. When the frights become too much for Renai, the family decides to stay with grandma for a while.

Lorraine Lambert (Barbara Hershey) has been through this kind of thing before, when her own son, Josh, was haunted as a child. She knows who to call. Josh was treated by ghost specialists as a child, and a flashback to his youth reveals even more about the source of his troubles.

Carl (Steve Coulter) is a serious ghost hunter, while his assistants, Specs (screenwriter Leigh Whannell) and Tucker (Angus Sampson), provide much of the comic relief, including the always-amusing tranquilizer mishap.

Directed by James Wan (“The Conjuring,” ”Saw”) from a story created by Wan and Whannell, “Insidious: Chapter 2” deftly juggles various responsibilities: It offers a good dose of non-gory scares, tells a story of supernatural time travel that recalls elements of “Inception,” and pays homage to the genre Wan and Whannell love. In a tribute to its horror lineage, look for thematic and visual nods to “Pyscho,” ”Poltergeist” and “The Blair Witch Project” in “Insidious: Chapter 2.”

The film is also self-aware and self-referential, rewarding viewers of the original film with additional explanations in the sequel. And, like its predecessor, “Chapter 2” leaves open the possibility of more to come.

“Insidious: Chapter 2,” a Film District release, is rated PG-13 for intense sequences of terror and violence, and thematic elements. Running time: 105 minutes. Two and a half stars out of four.