Perfect first win of the season for Malaga 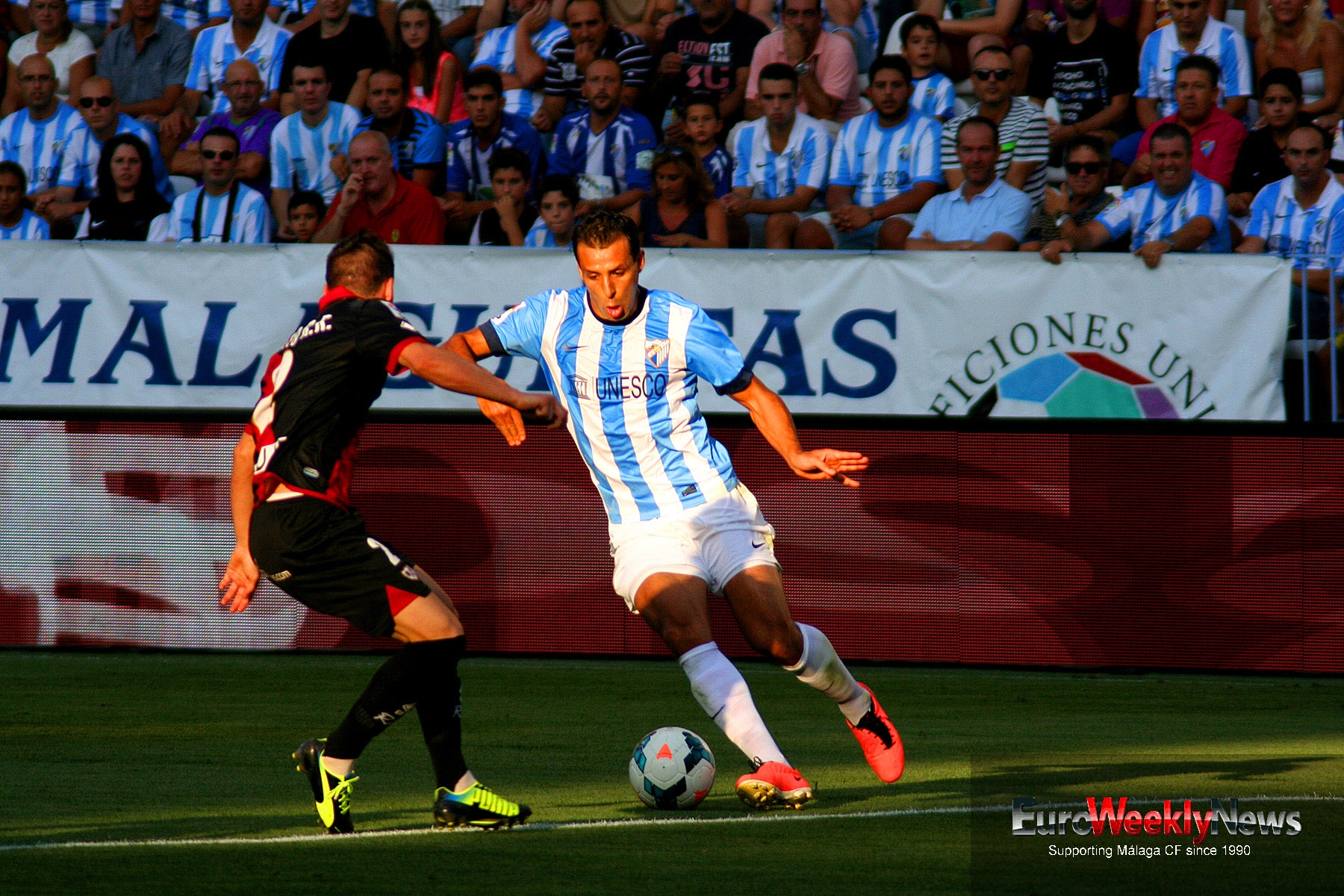 Málaga CF was determined to achieve the first victory of the season tonight, and went in search of the first goal straight after kick off.  A free kick from Eliseu was the first real chance for the Blue and Whites, as well as other opportunities for Pedro Morlaes and El Hamdaoui during the first 15 minutes of play.  Paco Jémez’s team didn’t respond to the Málaga attack until minute 21, with an assist from former ‘Malaguista’, Seba Fernández to Larrivey, but he failed to find the goal.

The Madrid-based side began to feel more comfortable on the pitch as time went on, with Trashorras taking the reigns.  However the magical combination of Antunes and El Hamdaoui led to the first goal of the night for the Blue and Whites.  The Portuguese-born winger set up a fantastic ball from the left wing, crashing through the Rayo defence, as well as keeper Rubén, leaving the Dutch-born striker with a clear shot at goal and netting the ball with a brilliant right-footer.  This was El Hamdaoui’s first goal of the game, during his first appearance at La Rosaleda.

Bernd Schuster’s men went on to further their lead, and the numerous goal chances at the beginning of the match were about to pay off.  In minute 40, a Pedro Morales kick covering three quarters of the pitch landed at the feet of El Hamdaoui, who again found himself unmarked in front of ex-‘Malaguista’ Rubén.  Not able to finish the job on his own, he found Portillo, who launched an amazing kick with his right foot, netting the ball and putting Málaga 2-0 up.

The locals dominated the first 45 minutes, created many goal opportunities and put on an inspiring performance.

The second half got underway with the same level of pace as the first, and another shot at goal for the Blue and Whites.  A promising assist from Gámez on the right found El Hamdaoui, but the striker couldn’t reach Rubén’s goal area.

Three minutes into the second half and it was Eliseu’s turn to shine.  A right footer directly in front of the six yard box led to Málaga CF’s third goal of the night, and Eliseu’s first goal of the season.  The Blue and Whites had practically now sealed their first win of the 2013/14 at La Rosaleda.

Málaga CF maintained good ball control and it soon became clear that a fourth goal was on the cards.  Portillo’s solid defence ensured any slight chance for the visitors was quashed, and good excellent combinative display between the El Palo-born player and Morales led to the fourth goal of the night, again from El Hamdaoui.

The atmosphere at La Rosaleda was electric, which was only bettered by El Hamdaoui scoring a hat-trick, following an Antunes free kick.  Rubén was unable to prevent the Dutch striker’s powerful shot at goal, and the locals were now 5-0 in the lead.

Schuster’s men continued in their quest for more goals, despite being 5-0 up.  Pedro Morales came close to goal number six, but this time Rubén was successful in preventing any further Blue and Whites’ glory.  Málaga’s finesse on the pitch continued, particularly at the back, as a chance for Jonathan Viera led to a perfect save from Willy Caballero in the 75th minute.

Both El Hamdaoui and Samu made their debut at La Rosaleda tonight, with the Dutch-born striker scoring a hat-trick during his first appearance at La Rosaleda.  The last ‘Malaguista’ to score three goals in a match was current Atlético Malagueño coach, Salva Ballesta, against FC Barcelona (also 5-0) in 2003.

The Blue and Whites’ first win of the season couldn’t have been better.  The team showed excellent game play, scored five great goals and reaped the rewards from their hard work during the first three League games.