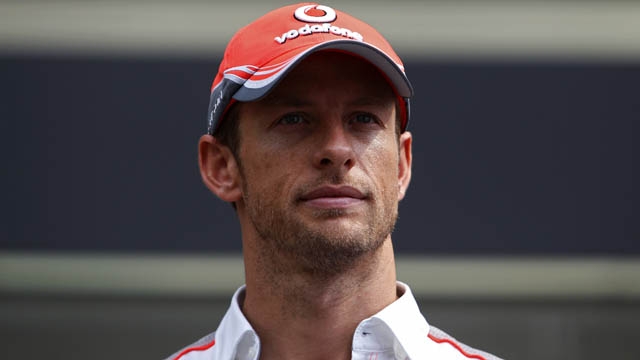 McLaren Formula One driver Jenson Button of Britain looks on before a promotional radio-controlled car race against youths in Singapore September 18, 2013. REUTERS/Edgar Su

Felipe Massa dodged questions about his Formula One future on Wednesday while Jenson Button wondered whether Ferrari would really be a stronger team when Kimi Raikkonen replaces the Brazilian next season.

Ferrari announced last week that Massa would leave the team at the end of the season, after eight years with them, to be replaced by their returning 2007 world champion alongside Spaniard Fernando Alonso.

A media scrum awaited Massa when he arrived to open a new Ferrari showroom in Singapore ahead of this weekend’s night-time grand prix.

He and Ferrari were less keen to discuss the split, with reporters shushed and microphones pulled away from the driver who only said “expectations are high” for Sunday and that he hoped for “a great race”.

Massa, who is currently seventh overall in the drivers’ standings 143 points behind Red Bull’s championship leader Sebastian Vettel, was more forthcoming in an interview with Brazilian television earlier this week.

“I know both Fernando and Kimi on and off the track and I rate them as excellent drivers, but I’m afraid they will collide when sharing the team,” he told TV Globo.

“I told the bosses to breathe as much as possible while they still can because it will be hard for them to breathe next season.”

Button, who formed part of Formula One’s most recent team of champions with Lewis Hamilton at McLaren until the end of last season when Hamilton moved to Mercedes, was keen to see how the new Ferrari pairing got on.

“It’s going to be an interesting atmosphere between those two especially if Kimi is as quick as Fernando,” the Briton told reporters.

“If Kimi starts out-qualifying Fernando that would be a big one because Fernando is not the quickest guy but as a package he’s exceptional, his race pace, he’s very good at thinking about situations so he’s going to be a tough guy to beat for Kimi.

“It’s fun for us watching from the outside you know, does it make the team stronger? I personally don’t think it does,” added the 2009 world champion.

Massa has been inconsistent since he came back from a life-threatening crash at the Hungarian Grand Prix in 2009 and has not won for Ferrari since he almost took the championship at the 2008 Brazilian Grand Prix.

Raikkonen has enjoyed a record run in the points, which ended last month in Belgium, since returning to Formula One with Lotus in 2012 after a two-year absence.

His pairing with Alonso, a double world champion, promises points but also fireworks.

Button’s McLaren team mate Sergio Perez expected them to be strong rivals for the other teams, however.

“I think it will be very interesting for all of us to see how they get on, both of them,” he told Reuters. “Looking forward I think Fernando and Kimi will be a tough couple to beat.”