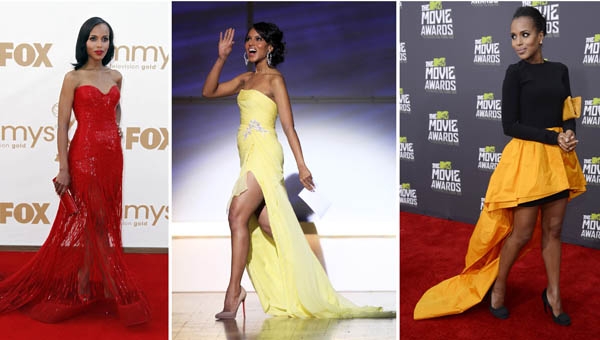 Combination photo shows file photos of actress Kerry Washington, L-R: at the 63rd Primetime Emmy Awards in Los Angeles on September 18, 2011, at the 21st annual Glamour Magazine Women of the Year award ceremony in New York on November 7, 2011 and at the 2013 MTV Movie Awards in Culver City, California on April 14, 2013. REUTERS

Actress Kerry Washington, who was nominated for an Emmy for her role in the ABC television drama “Scandal,” was named the “World’s Best Dressed Woman” by People magazine on Wednesday.

“I don’t wear a lot of pants,” Washington said in a statement announcing the honour. “When I go somewhere I want to know I’m going to be comfortable and I’m dressed for the event.”

“There has been a trend this year in lady-like fashion and I think she is almost single-handedly responsible for it,” Sporkin said in an interview.

Although Washington nabbed the best dressed title, Lawrence, the winner of this year’s best actress Oscar for “Silver Linings Playbook,” was cited as having the best high fashion style, and actress Jessica Chastain, the star of 2012’s “Zero Dark Thirty” had the best red carpet style, according to People.

Solange Knowles got top marks for style risk-taking and confidence.

“She really does push the envelope,” said Sporkin. “No one else would even think of putting together the looks she wears. She always pulls it off.”

“Avatar” actress Zoe Saldana had the best denim style and actress Lily Collins was named the best for up-and-coming style.

Actress Emma Stone, the star of “The Amazing Spider-Man” and “The Help,” won praise for her classic style and timeless looks and television host Nicole Richie was named best in trend-setting style.

The celebrity magazine said it compiled the list after getting input from its editors, its 42 million readers and fashion directors and bloggers.

The magazine also looked back at fashion moments of the year, citing actress Sarah Jessica Parker’s haute punk mohawk headdress by designer Philip Treacy at the Met Ball in New York and first lady Michelle Obama’s bangs, which she has recently grown out.