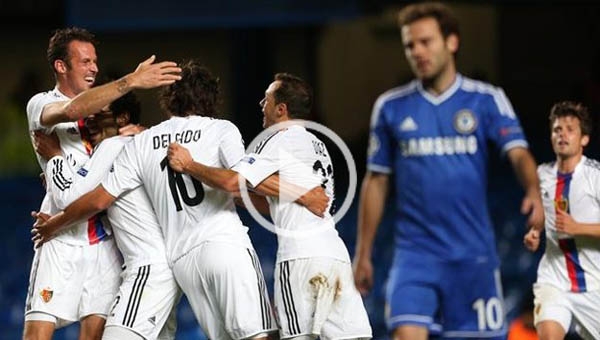 After the euphoric return, reality is biting for Jose Mourinho, and the Chelsea homecoming is quickly going sour.

Having already presided over the worst Premier League start in Roman Abramovich’s decade as owner, Mourinho is now reeling from the London club losing its Champions League group stage opener for the first time.

Swiss champion Basel had never won a game in England until coming from behind on Wednesday at Stamford Bridge to beat Chelsea 2-1 in Group E.

The winner came in the 82nd minute after Marco Streller seized on slack defense at the near post to meet a corner and flick a header past goalkeeper Petr Cech.

“I am responsible for everything,” Mourinho said. “Especially after a bad result.”

Although Oscar lit up a drab start by curling Chelsea in front before half time, the 2012 European Cup winners and reigning Europa League champions missed a succession of chances to extend their lead after the break.

And Basel, which beat Manchester United in the 2011-12 group stage, made Chelsea pay for its wastefulness when Mohamed Salah began the comeback in the 71st by bending in the equalizer.

This was even more embarrassing for the west London club.

Not since October 2003, when Claudio Ranieri was in charge at the start of Abramovich’s ownership, had Chelsea even lost a game in the group stage.

“We go home sad,” said Mourinho, who wants to avoid Chelsea dropping into the Europa League to defend its title.

This setback comes with Chelsea already three points off the Premier League lead after four games, having opened with two wins, a draw and a loss to sit in sixth place.

“We still believe in each other,” Mourinho said. “We need to keep together, stick together and try against Fulham (on Saturday) to get the result to wake up the team for a smile.”

“Fantastic evening for Basel supporters, wow!” tennis great Roger Federer wrote on Twitter. “I am so happy, thanks FC_Basel.”

“Winning here at Chelsea against a manager like Mourinho is a great achievement,” Basel coach Murat Yakin said through a translator. “But I’ve spoken with my players and we have to remain modest … there is a lot ahead of us still.”

Basel is only off top spot in Group E because Schalke beat Steaua Bucharest 3-0.

Against Basel, there was no Fernando Torres in the starting lineup or even on the bench, and Demba Ba only came on in the second half with the teams locked at 1-1.

But the Cameroon striker, a four-time African player of the year and the world’s best-paid star while at Anzhi, couldn’t even muster a shot on goal.

“Samuel maybe lacked sharpness and this doesn’t surprise really when you are some years in a place that doesn’t motivate you and you are out of the big stage, maybe you’re there not for the right reasons and you lose hunger and appetite,” Mourinho said. “Now he has that back, he has that motivation.”

Chelsea’s breakthrough instead came from Oscar in the 45th minute, with David Luiz, who had concerned Mourinho with his sloppiness in defense, bringing the ball forward.

The Brazil center back fed Frank Lampard and Oscar connected with a throughball before striking low past goalkeeper Yann Sommer.

After an insipid first half — the type of performance fans jeered during Rafa Benitez’s interim reign last year — Chelsea discovered some spark after the break.

But, first the cross bar denied Oscar and, when he tried to curl a shot into the net from a similar position outside of the area, the ball went wide.

The pressure was increasing, but a second goal proved elusive.

A towering header from Branislav Ivanovic was saved by Sommer at close range and the defender saw another header from a free kick nodded clear.

The game really came to life when Basel finally found its stride to stun the hosts.

Slick build-up play allowed Marco Strelle set up Salah to curl in the leveler from the edge of the area.

Then, Chelsea defenders left Streller in space to meet Kay Voser’s corner at the near post and compound the early anxieties for Chelsea at the start of a season that promised so much with the morale-boosting return of Mourinho.