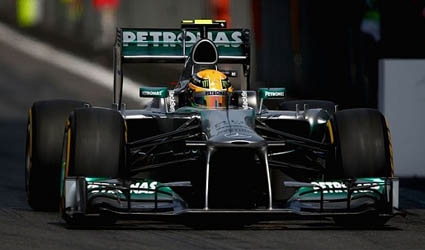 SINGAPORE (Reuters) – Lewis Hamilton was fastest in first free practice at the Singapore Grand Prix on Friday with his Mercedes comfortably ahead of the chasing Red Bulls on the demanding Marina Bay Street Circuit.

The Briton, a winner in 2009, clocked one minute 47.055 seconds in dry conditions to finish 0.365 seconds ahead of Mark Webber with the Australian’s Red Bull team mate and runaway championship leader Sebastian Vettel third fastest in 1:47.885.

After two difficult weekends on the low downforce circuits in Belgium and Italy, Mercedes are hoping for a marked improvement on a high downforce layout.

Hamilton won in Hungary, another tight and twisty circuit, while team mate Nico Rosberg was victorious in Monaco, the slowest of all.

The German team’s confidence was quickly backed up by Hamilton in the first 90-minute session of the weekend with the 2008 world champion saying “the circuit feels twice as grippy as last year” over the team radio after setting the quickest lap.

Rosberg clocked the fourth fastest time (1:48.239) to suggest the weekend is likely to be a straight shootout between Mercedes and Red Bull on a 23-corner circuit where overtaking is very difficult.

Kimi Raikkonen showed that his confirmed switch to Ferrari for next season will not hinder his performance as the Finn finished fifth fastest for Lotus, another car that prefers high downforce tracks, one place ahead of team mate Romain Grosjean.

With rumours circulating around the paddock that Ferrari’s Fernando Alonso could be poised for a move to McLaren, the Spaniard failed to make an impact and was only seventh fastest, 1.307 seconds off the pace.

Alonso has won twice in Singapore but Ferrari will need to find more speed if he is overhaul a 53-point deficit to Vettel.

The session passed with little incident and with the infamous ‘Singapore Sling’ turn 10 chicane less of a threat after track officials took heed of driver complaints. Only a few drivers came close to brushing the wall on the exit.

The teams and drivers will have two hours to analyse their data before they head out for the second free practice session at 9:30 p.m. (1330 GMT)

The Singapore Grand Prix is the 13th round of the 19-race season with races in Korea, Japan, India, Abu Dhabi, the United States and Brazil to follow.