McLaren would be happy to take Alonso back 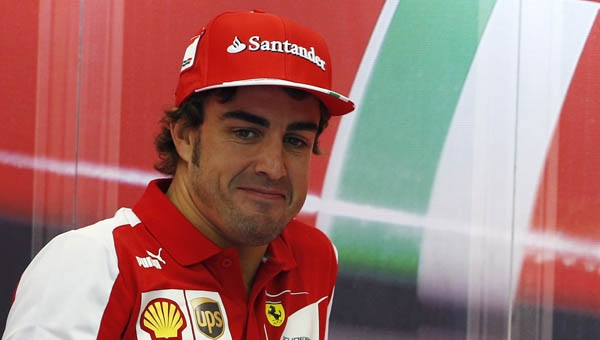 (Reuters) – McLaren sent Fernando Alonso a clear signal on Friday that they would welcome him back, despite a major falling out in 2007, should the Spaniard seek to leave Ferrari.

Team principal Martin Whitmarsh, who took over from Ron Dennis in 2009, told Britain’s Sky television at the Singapore Grand Prix that he would have no hesitation in signing the double world champion who left McLaren under a cloud.

“Yes, if I could,” he said. “I think most teams up and down this pitlane would happily sign Fernando Alonso. He’s a very talented driver.

“I expect next year our driver line-up to stay the same but we are open to anything,” he added. “And in the longer term then he’d be a great asset. I think Fernando’s in control of his own destiny, but we’ll see.”

McLaren have yet to confirm their 2014 line-up, although Whitmarsh said 2009 world champion Jenson Button’s deal was done, while Ferrari have signed 2007 champion Kimi Raikkonen to partner Alonso.

The Spaniard has a contract to the end of 2016 but British media was abuzz on Friday with speculation that Alonso could, despite his own assurances to the contrary, walk out of Maranello in what would be the shock of the formula one season.

Alonso is used to having a clear number one role, and his pairing with Lewis Hamilton at McLaren in 2007 and that team’s insistence on giving equal terms to both despite the Briton’s rookie status, led to an acrimonious breakdown in their relations and the Spaniard’s departure.

At Ferrari, Alonso has been partnered by Brazilian Felipe Massa – who has not won a race since 2008 and has acted as a supportive number two.

Asked whether he sensed Alonso was now ‘more gettable’ because of Raikkonen’s arrival, Whitmarsh said it would be wrong for him to comment on what was going on at Ferrari.

“I think people were surprised with the recruitment of Kimi, not because Kimi’s not massively talented or that he would want to go to Ferrari, but…whether it’s a sustainable driver line-up I don’t know.

“Let’s be frank. People want to sign Fernando Alonso because he is one of the best racing drivers in the world at the moment,” said Whitmarsh. “He’s an asset to any team.”

Pressed on the likelihood of Alonso returning one day to former champions McLaren, who have had a woeful season so far without a single podium finish, Whitmarsh did not rule out a change in their current line-up even if he expected it to remain the same.

“There’s a lot of froth and excitement around these issues but being realistic, that’s what I think will happen (Button and Mexican Sergio Perez to stay). But we’ll see.”