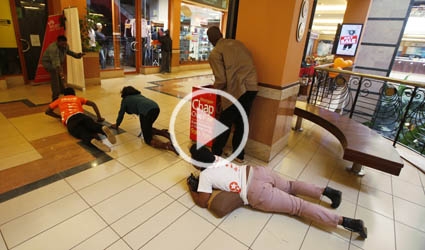 NAIROBI (Reuters) – Militant gunmen stormed a shopping mall in Nairobi on Saturday killing at least 25 people, including children, and sending scores fleeing in panic from shops and restaurants onto the streets, according to witnesses and the Red Cross.

Shooting continued hours after the initial assault as troops surrounded theWestgate mall and police and soldiers combed the building, hunting down the attackers shop by shop. A police officer inside the building said the gunmen were barricaded inside the Nakumatt supermarket, one of Kenya’s biggest chains.

“We got three bodies from this shop,” he said, standing a dozen metres from the supermarket entrance and pointing to a children’s shoe shop where blood lay in pools.

He turned to a nearby hamburger bar where piped music still played and food lay abandoned in a similar bloody scene. “And a couple of bodies here.”

The Westgate mall attack was the single biggest since al Qaeda’s east Africa cell bombed the U.S. embassy in Nairobi, in 1998 killing more than two hundred people. In 2002, the same militant cell attacked an Israeli-owned hotel and tried to shoot down an Israeli jet in a coordinated attack.

Tiles were smeared with blood, bullet casings were strewn on the floor and shop windows were shattered. A policeman dragged the corpse of a young girl across the floor and lay her on a stretcher. Two plainclothes policemen lay on the floor with guns trained on the Nakumatt supermarket entrance.

Some local television stations reported hostages had been taken, but there was no official confirmation.

The Somali militant group al Shabaab, which Kenya blames for shootings, bombings and grenade attacks against churches and the security forces, had threatened before to strike Westgate, a mall popular with the city’s expatriates. The chain of attacks came in answer to a cross-border action by Kenyan forces against al Qaeda-linked militants in Somaliatwo years ago.

Somalian President Hassan Sheikh Mohamud said it was too early to draw conclusions. “We don’t have any proof that the people who did this are Somali,” he told Reuters in Washington.

Though apparently a militant operation rather than a criminal act, it was not clear whether the attackers were religious militants. One woman leaving the building told a journalist that one of the attackers had told all Muslims to leave the area; but there has been no claim of responsibility.

Police helicopters circled above shortly after the initial assault as armed police shouted “get out! get out!” and scores of shoppers fled the sand-coloured stone building. Smoke poured from one entrance and witnesses said they heard grenade blasts.

Others said they saw about five assailants storm the mall.

The mall includes a number of Israeli-owned businesses, though it was not immediately clear if these were the target of the attack. At least four Israeli nationals escaped the assault, one with light wounds.

“As of now this appears to be an internal Kenyan incident, that is, a terrorist attack but not one that specifically targetted Israelis,” a spokeswoman at Israel’s Foreign Ministry said.

Kenya’s Ministry of Interior said: “It is a possibility that it is an attack by terrorists, so we are treating the matter very seriously.”.

One eyewitness who identified himself as Taha said he heard the screech of brakes followed moments later by an explosion and then sustained gun fire from the ground floor.

Another survivor said he was shot by a man who looked Somali.

Some shoppers ran up stairs and escalators and hid around the mall’s cinema complex. Police found another terrified group hiding in a toilet on the first floor.

Some wounded were wheeled out on stretchers and shopping trolleys. Many of the victims had multiple light wounds, apparently from flying debris. Other walked out, some with bloodied clothing wrapped around wounds. Dozens of wounded were ferried away by ambulance.

“I have counted twenty five dead, and that is just from the mall alone,” said Kenyan Red Cross Secretary General Abbas Guled.

“The attackers are still inside the Nakumatt supermarket and we have not entered there, so we expect more wounded and dead. Then we have those wounded taken to the hospitals, the death toll could be high.”

Al Shabaab have previously threatened to launch strikes on Nairobi’s tower blocks and soft targets including nightclubs and hotels known to be popular with Westerners in the capital. But they have so far failed to carry out such an attack.

“I personally touched the eyes of four people and they were dead. One of them was a child,” said one former British soldier at the scene.

“It’s carnage up there.”

Asked if the attack was a robbery, one paramilitary officer said: “No, terrorist”. There has, though, been no official statement from the police regarding the attackers’ motive.

Police cordoned off the roads surrounding the mall in central Nairobi’s Westlands neighbourhood.

Satpal Singh, who was in another cafe on the mall’s top floor said he ran downstairs when he heard the gunfire and was shot at near the mall’s main exit.