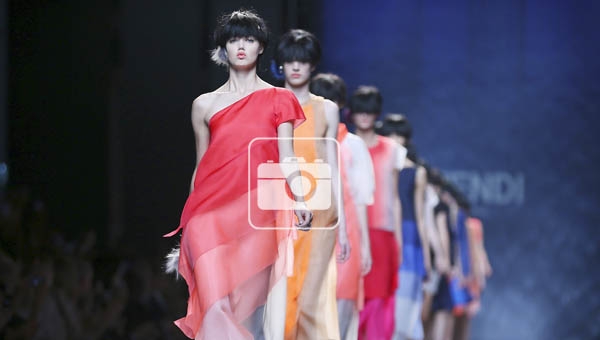 Milan is seeking to reclaim its fashion pre-eminence with a re-energized fashion week not only through strong messages from the runways but concrete acts of to enhance the city’s prestige.

Fendi unveiled a new flagship store on via Montenapoleone, Kate Moss was on hand to launch a new retail concept for Stuart Weitzman and Costume National returned to Milan after a two-decade womenswear absence.

Roberto Cavalli said that Italian design is still driven by homegrown creativity — and he hopes to see a greater push for young designers going ahead. “What’s great about Milan we are the ones who design Italian fashion,” he said.

On the second day of Milan Fashion Week on Thursday confirmed a trend toward dresses and skirts and away from pants. Not all of the looks were overtly feminine, although some reveled in chiffon and other light fabrics. Prada aside, most labels eschewed patterns and glitzy accents, preferring strong monochromatic shades.

Miuccia Prada is the most eclectic designer on the Milan runway. Every season she goes to a new place, either literally or figuratively, for inspiration and comes up with a collection that is different from everybody else’s and almost always brings down the house.

The murals translated into the collection as women’s faces on knitwear and fur, rainbow patterns on overcoats and handbags — and the overall over-the-top feel of the collection.

Originally renown as a minimalist designer, Prada went to town in this avant-garde collection full of glitter and glam. One of the leitmotifs was a graphic brassiere superimposed on outwear — sometimes as an image, sometimes in bold sequins. The effect was a bonanza of color.

The looks were both an exploration of femininity and urban power. This is seen in the pleated skirts worn with athletic striped leg warmers and thick-soled sports sandals, albeit showered with sequins. As with many collections this round, pants were few and far between.

The latest Fendi collection is both feminine and flip — in short, very chic.

At times reminiscent of 1950s couture, the breezy, colorful show is appropriately dubbed “dreamwear” by the label’s designer, Karl Lagerfeld.

See-through chiffon and organza allow the body to take the lead without ever clinging to its contours. The silhouette is boxy rather than curvy, with lots of geometric lines: squares, trapezoids and triangles.

Fresh sherbet and fluorescent colors are worked in monochrome blocks, most evident in the show opener, a sheath dress made up of flaps in progressive shades of pink, from rose to raspberry. The same theme was re-created on the invitation.

There were few pants in the collection, with a pert knee-length sheath under a summer coat the favorite look. By night, the same look is transformed into dreamy evening gowns under dramatic diva coats.

Costume National hung out an “under construction” sign on the long-awaited Milan return of its women’s collection.

The phrase described both the space where designer Ennio Capasa staged the company’s return after a 23-year stint in Paris and the looks themselves.

Capasa purposely sought out the raw, concrete subterranean cavern beneath a glass high-rise to unveil his new collection, which he dubbed “De-Construct-Re-Construct.”

Exploring the limits of tailoring, Capasa left lots of spaces uncovered — bare curves between the breasts, high arches on the back. Straps helped to anchor the gilets, jackets and halters securely in place. The looks were finished with skirts — to-the-ankle, slit A-lines, or at-the-knee pencil — and cropped trousers. Silhouettes were loose, unconfining.

The designer stuck to strong colors: black and white, with some acid yellow and coverall blue. Footwear was either pointed shoes with thin straps or open-toe sandals, always on a wedge.

Max Mara has clean looks for next summer that are alternatively playful and workaday.

The women’s collection had an austere quality reflected in the monochrome neutral shades and simple lines that by contrast lent emphasis to playful touches: layers of sheer fabrics, lame shimmers, and youthful romper or jumpsuit silhouettes.

For the urban professional, there were straight pencil skirts and spaghetti strapped sheaths all landing discreetly below the knee. Max Mara topped them with sleek button-less jackets, varying in length. There were few trousers, a trend emerging this season in Milan.

The label recognized the demands of today’s professional woman and equipped her with not just one bag but two: the versatile JBag and a clutch.

For evening, there were shimmery sheer below-the-knee sheaths worn over mini dresses or rompers. And for any hour playtime, Max Mara broke out the color: eye-popping orange, green, fuchsia, royal blue and purple. The single-shade outfits with rompers or dresses were accessorized with color-coordinated sheer hosiery, bags, stiletto heels and oversized rounded sunglasses.

Just Cavalli is reminding young women to remain carefree, and show some skin, but with grace.

The collection reveled in patterns: checks, florals and plaids. While other designers underplayed pants, Just Cavalli celebrated them, pairing them with bra tops, cropped tops and biker jackets.