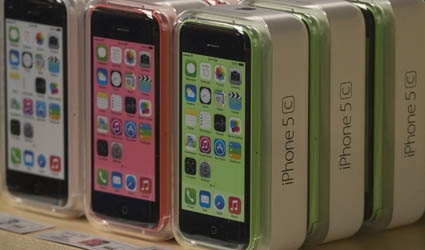 Sales of the new models were nearly double those of the iPhone 5 in the first weekend after its launch a year ago. The iPhone 5 sold 5 million in its first three days on the market.

“It’s a great number,” Colin Gillis, an analyst with BGC Partners, of the sales figure for the 5s and 5c. “We have been saying they will be selling every 5s they can make and it looks like that is the case.”

Wall Street analysts had expected Apple to sell about 6 million of the two new iPhones.

“The critics have told you Apple lost its magic,” he said. “Customers are telling you something very different. Clearly, people like the product. That sentiment is almost more important than the number.”

Demand for the iPhone 5s has exceeded initial supplies, and many online orders are scheduled to be shipped in the coming weeks, Apple said.

On Friday, long lines formed outside stores in Tokyo, New York, San Francisco and other cities for the new top-of-the-line 5s and the less-expensive 5c. It was the first time Apple launched two iPhone models simultaneously.

The gold-coloured version of the 5S, which also comes in silver and gray, was sold out as of Friday and will now ship only in October, according to Apple’s website. As of Monday, the two other colours were also set to be shipped only in October.

“The demand for the new iPhones has been incredible, and while we’ve sold out of our initial supply of iPhone 5s, stores continue to receive new iPhone shipments regularly,” Apple Chief Executive Tim Cook said in a statement. “We appreciate everyone’s patience and are working hard to build enough new iPhones for everyone.”

The company said more than 200 million iOS devices are now running the upgraded mobile operating system iOS 7, which was rolled out just before the iPhone launch.

Apple did not break out separate sales figures for the 5s and 5c. The 5s, whose price starts at $199, offers a touch ID that scans a user’s fingerprint to unlock the phone. The 5c, which starts at $99, comes in an array of colours.

Apple for the first time simultaneously launched the new iPhones in China, a crucial market, along with the rollout in Hong Kong, Singapore, the United States, Australia, Japan, UK, Canada, Germany, France and Puerto Rico.

It previously launched it phones in China a few months after the U.S. launch.

The more optimistic margin forecast should allay investor concerns that, at just $100 less than the 5s, the 5c will draw buyers away from the premium gadget.

“If Apple could ship so well without even having a larger screen iPhone, which we think it could deliver next year, then Apple is getting over a key hump,” Shebly Seyrafi, an analyst with FBN Securities, said in a note to clients. “We believe that the immediate availability of the phone in China is also a key driver of the strength.”