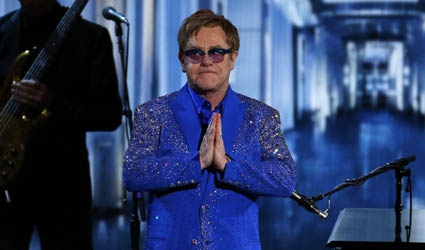 In an open letter to Putin, the local parents’ group in central Ural region was reported by media as saying: “The singer intends to come out in support of local sodomites and break the current Russian law, directed at protecting children.”

Critics say the law banning gay “propaganda” among minors – which has prompted calls for a boycott of Russia’s hosting of the 2014 Winter Olympics – is discriminatory, barring people from being open about their sexual orientation.

The law is part of a broader attempt by Putin to win over Russians in the mostly conservative country following protests against his rule among urban and often middle class voters over his return to the Kremlin last May.

The parents’ committee was unavailable for comment despite repeated phone calls.

Sir Elton John, who reminisced in an interview earlier this month with the Guardian newspaper of having sex on a Moscow rooftop with a translator during his 1979 Soviet Union tour, said he wanted to perform in Russia to support the gay community.

“As a gay man, I can’t leave those people on their own without going over there and supporting them. I don’t know what’s going to happen, but I’ve got to go,” he said in the interview.

John will perform on December 6 in Moscow and December 7 in Kazan.

One of the world’s most prominent gay celebrities, he lives with his partner David Furnish, with whom he is in a civil union, and is bringing up two children.

He has campaigned for gay rights in Britain and in Ukraine where he was denied the right in 2009 to adopt a child because of his age and marital status.

Reuters received no comment from John despite an email request.

U.S. singer Cher turned down an invitation to perform at the Winter Games in Russia’s Black Sea resort of Sochi because of the anti-gay propaganda, saying the decision was a “no brainer”.

Homosexuality was decriminalized after the collapse of the Soviet Union in 1991, but polls by the independent Levada Centre show a majority of Russians approve of the new legislation and nearly 40 percent believe gay people need treatment.