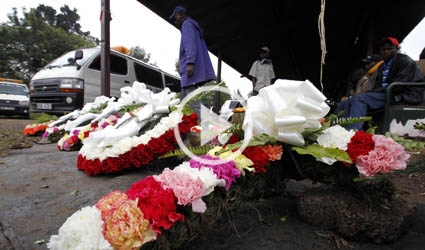 Flower wreaths are displayed for sale outside the City Mortuary, for the victims who were killed during the attack at the Westgate Shopping Centre in Kenya's capital Nairobi, September 25, 2013. REUTERS/Thomas Mukoya

NAIROBI (Reuters) – As Kenya began three days of mourning on Wednesday for at least 67 people killed in the siege of a Nairobi mall, it was unclear how many more hostages may have died with the Somali Islamist attackers buried in the rubble.

Declaring final victory over the al Qaeda-linked gunmen from al Shabaab who stormed the Westgate shopping centre on Saturday, President Uhuru Kenyatta said that three floors in a part of the mall had collapsed near the end of the operation, leaving an unknown number of bodies under steel and concrete.

It was not clear what caused the structure to come down.

Five militants had been shot dead, Kenyatta said, and six security personnel died in the four days of fighting.

Sixty-one civilians had so far been confirmed dead, Kenyatta added. Kenyan officials declined to say how many of 63 people whom the Red Cross had earlier classed as unaccounted for may also have died in a showdown with guerrillas, who had threatened to kill their hostages and go down fighting.

Eleven people suspected of involvement with the well-planned and executed assault were in custody, the Kenyan president added. But he did not say how many, if any, were gunmen taken alive and how many may have been people arrested elsewhere.

It was also unclear whether intelligence reports of American or British gunmen would be confirmed. Al Shabaab denied that any women took part, after British sources said the fugitive widow of one of the 2005 London suicide bombers might have some role.

The shattered mall, an imposing, Israeli-built symbol of a new prosperity for some in Africa while many remain mired in poverty, lay largely silent overnight, after days of gunfire, explosions and bloodshed.

“The operation is now over,” Kenyatta told Kenyans in a televised address. “We have ashamed and defeated our attackers.”

Police said the attackers, who devastated restaurants and shops at a busy Saturday lunchtime, spraying bullets and grenades at Kenyans and foreigners, were now either dead or in custody.

“Now it is for the forensic and criminal experts,” said a police spokesman, Masoud Mwinyi.

Some of the 63 people reported to the Red Cross as still missing may simply not have been at the mall, or may have later made it home without the agency being made aware. But some, at least, appear to have been held hostage.

“There are several bodies trapped in the rubble, including the terrorists,” Kenyatta said. At the weekend, he had said there were between 10 and 15 militants holed up in the mall.

Several foreigners of many nationalities have already been named among the dead. The mall was a favourite with expatriates.

It is unclear how many foreigners may still be missing.

Survivors of the assault told tales of horror and narrow escapes. Some made it out after hours, even days, of hiding in terror. The uncle of one British four-year-old told the Sun newspaper his nephew had told a militant “You’re a very bad man”, as the gunman let some children and their mother go.

Officials said the raiders had set a major fire on Monday in a supermarket. On Tuesday, a thin trail of smoke drifted into a soggy sky as darkness fell, the result, rescue volunteers said, of soldiers detonating locked doors in a search for militants.

Police let some people retrieve cars they left behind when shoppers fled in panic. Journalists and others were kept well away behind a security cordon.

Kenyatta said he could not confirm intelligence reports of British and American militants, adding that forensic tests were being carried out to establish their nationalities. The government denied speculation that women were among the guerrillas, but said some had been dressed as women. That may have been a ploy to smuggle more weapons past mall guards.

It is unusual, if not unknown, for Islamist militants to use female fighters: “We have an adequate number of young men who are fully committed & we do not employ our sisters in such military operations #Westgate,” al Shabaab said on Twitter.

It also dismissed comments by a Kenyan minister that two or three of the militants were young Somali or Arab Americans.

A British security source said it was possible that Samantha Lewthwaite, widow of Germaine Lindsay one of the London suicide bombers of July 7 2005, was involved in the Nairobi siege in some way. “It is a possibility. But nothing definitive or conclusive yet,” the source said.

Lewthwaite is wanted in connection with an alleged plot to attack expensive hotels and restaurants in Kenya.

Making no mention of gunmen still in the mall, al Shabaab also drew a link to the most recent Islamist attack in London, when a soldier was stabbed to death on a busy street in May in the suburb of Woolwich. Michael Adebolajo and a fellow British Muslim convert of Nigerian descent face trial for murder.

“It’s an eye for an eye and a tooth for a tooth…’ Remember Mujahid Adebolajo? This is what he meant. His was #Woolwich, #Westgate ours!” read another al Shabaab Twitter post.

“These cowards will meet justice as will their accomplices and patrons, wherever they are,” said Kenyatta.

He thanked other leaders, including U.S. President Barack Obama, for their support and used his address to praise the response of the Kenyan people and call for national unity, six months after his election was marked by ethnic tensions.

“Kenya has stared down evil and triumphed,” he said.

Many Kenyans agree that the bloodshed has helped foster a greater sense of national unity.

“We are all talking about it. The one good thing is that the whole of Kenya has become one, except for al Shabaab,” said Vipool Shah, who helped pull bodies out of the mall.

Kenyatta’s focus on Kenya’s troubles, and of his role in a global campaign against terrorism, was a reminder that he faces trial at The Hague in a few weeks time for crimes against humanity over violence that followed a 2007 election. The International Criminal Court adjourned the trial of his vice president this week because of the Westgate attack.

Kenyatta and his government have urged the ICC to drop the case and warm words for the Kenyan leadership from Western allies during the siege may have boosted their hopes that the court might be pressed to shelve proceedings in the interests of shoring up an important partner in the fight against al Qaeda.

The Nairobi attack came at a time when several violent Islamist groups from Mali to Algeria and Nigeria to Kenya have tapped into local grievances. But all have espoused an anti-Western, anti-Christian creed and are striking at state authority and international interests.

Regional intelligence experts believe the Nairobi raiders were members of a crack unit loyal to leader Ahmed Godane, who has been seeking to rebrand al Shabaab as a significant international jihadist group.

Al Shabaab had threatened revenge since Kenyan troops joined the war against Islamists in its chaotic northern neighbour two years ago. The group created funding, recruiting and training networks in Kenya. Kenyatta dismissed an al Shabaab demand to pull Kenyan troops from Somalia after the mall siege began.

The attack bears out Western concern that Somalia, a hotspot in the U.S.-led war on Islamist militants across the globe, may be a launchpad for strikes on regional countries even as African troops put them on the defensive in the Horn of Africa state.

Obama, whose father was Kenyan, said he believed the country – scene of one of al Qaeda’s first big attacks, in 1998, when a bomb devastated the U.S. embassy in Nairobi – would continue to be a regional pillar of stability.

Somalia’s prime minister appealed in Geneva for international support to combat al Shabaab, but said a military solution to their insurgency alone was not enough.

Abdi Farah Shirdon said: “We still have a difficult journey ahead of us. A military solution alone is not enough, promotion of rule of law, greater regional cooperation and economic stability and provision of public services are all key factors.”