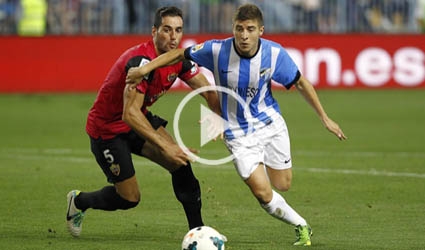 Málaga CF was welcomed on to the pitch by thousands of fans, which helped the Blue and Whites take the reigns of the game straight after kick off.  El Hamdaoui had the first clear shot of the match after eight minutes, taking advantage of an excellent pass from Portillo over the Almería defence, however veteran keeper, Esteban prevented the locals opening the scoring.  Antunes had a chance seconds later, but again the Almería keeper won the battle.

The visitors were having problems controlling Bernd Schuster’s men around Esteban’s goal area, and just as the keeper moved away, Tissone attempted a surprise midfield shot at goal, but the ball went over the crossbar whilst Esteban looked on.

Thirty minutes into play and it was Almería’s turn to take the initiative.  A corner kick set up a chance for Pellerano in the penalty area, but the genius of Caballero’s reflexes prevented Francisco Rodríguez’s team from taking the lead.

Impressive combinative display between Anderson, Portillo and Gámez in minute 38 resulted in another near miss for the Blue and Whites.  Gámez found El Hamdaoui, however he narrowly missed the target.  Almería quickly retaliated with a kick from Rodri, but were unable to find the net.

The ‘Malaguistas’ had another clear chance to open the scoring before half time thanks to a shot from Portillo, but he sent the ball too far to the left of Esteban’s goal area.  Despite a goalless draw after 45 minutes, it was Schuster’s men who had dominated play so far.

The second half got off to a flying start for a determined Málaga, who immediately caused trouble in the Almería goal area.  A pass from Duda to Antunes in minute 48 set up a great ball for the Portuguese-born player, but the keeper had little trouble in preventing an early second half goal.  Almería kept Málaga on their toes as Suso gained possession from Antunes and was awarded a corner kick, however the scoreboard remained level.

An hour into the match and Málaga created two clear goal chances.  Impressive play from El Hamdaoui assisted in a powerful shot at goal by Duda that led to a corner kick.  This then resulted in another near miss for El Hamdaoui, but the ball hit the post.  These were the two best chances for the Blue and Whites so far in the match, coupled with an excellent display from Portillo.  A shot from Darder resulted in another corner, and then a second chance for the Blue and Whites’ reserve player to score, but it wasn’t to be.

The best moment of the match for the home side came in minute 68.  A Duda corner kick landed at the feet of Sergio Sánchez, who set up a wonder ball for Tissone, who then smashed the ball into the back of the net.  A well-deserved first goal for the Blue and Whites in the second half, following the consistent upfront attacking display throughout.

Almería were determined to find an equaliser, but a strong Málaga CF defence prevented Francisco Rodríquez’s men from getting anywhere near Willy Caballero’s goal.

Málaga weren’t about to take any chances in extra time.  Stunning play by Roque Santa Cruz on the left wing assisted Portillo in the second goal of the night for the locals.  The El Palo-born player sailed through the Almería defence to seal the Blue and Whites’ victory.

Málaga kept an important three points at home after their second League win this season, following a draw last Saturday in San Sebastián, and another match on Friday in Valladolid.