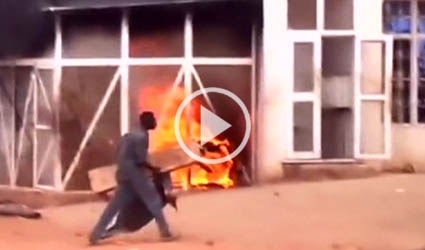 KHARTOUM (Reuters) – At least 27 people have been killed in protests in Khartoum over fuel subsidy cuts announced by President Omar Hassan al-Bashir, a medical source said on Thursday, in the worst outbreak of unrest in Sudan’s capital in years.

Thousands of protesters torched cars and petrol stations in central areas of the capital on Wednesday, sending thick plumes of black smoke into the air. Internet access went down across the country, although the cause was not immediately clear.

President Bashir, though facing a warrant for his arrest issued by the International Criminal Court, has avoided the unrest that unseated rulers in Arab states like Egypt and Tunisia; but anger has risen over inflation and corruption.

A U.N. official told Reuters by email that Bashir, who came to power in a 1989 coup, would not be coming to New York for a meeting of the General Assembly. The President had said on Sunday he planned to attend and had booked a hotel.

Relatives and medics said at least six people were killed in Wednesday’s protests, but a medical source at a hospital in Khartoum’s Omdurman neighbourhood, asking not to be named, told Reuters: “There were 27 people killed in the protests and their bodies are at the Omdurman hospital.”

The Arab-African country has suffered armed insurgencies in its poor peripheral regions for decades, but the wealthier central areas along the Nile including Khartoum are usually relatively isolated from unrest.

Similar protests broke out in June last year after some fuel subsidies were cut, but they fizzled after a security crackdown. This round of unrest started on Monday after the government announced another set of cuts to fuel subsidies.

The secession of oil-producing South Sudan in 2011 hurt Sudan’s economy, depriving it of about three-quarters of the crude production it relied on for state revenues and foreign currency used to import food.

Bashir, announcing the cuts on Sunday, said the subsidies posed a danger to the entire Sudanese economy.

The state-linked Sudanese Media Centre said schools in Khartoum state would be shut until September 30. Students have been at the forefront of previous rounds of anti-government protests.

Authorities have not commented on the internet outage, which continued on Thursday, but a private sector telecoms official told Reuters the government had cut off internet without consulting telecoms firms.

The governor of Gezira state, where protests first broke out on Monday, said the unrest was “premeditated” and that rioters attacked electricity and fuel stations and tried to loot banks and stores, the Sudanese Media Centre reported on Wednesday.

Bashir has remained in power almost 25 years despite armed rebellions, U.S. trade sanctions, an economic crisis, an attempted coup last year and the warrant for his arrest issued by the International Criminal Court.

Washington has led calls for Bashir to face international justice over bloodshed in the now decade-old conflict in Sudan’s Darfur region. The U.S. ambassador to the U.N. had previously called Bashir’s intention to travel to New York “deplorable”.