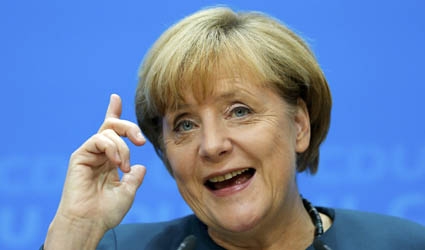 BERLIN/FRANKFURT (Reuters) – Angela Merkel’s best hope of saving her bold energy revolution may lie in a coalition with the center-left Social Democrats (SPD), who could agree to modest cuts to costly incentives for green power which are, paradoxically, driving up energy prices.

The German chancellor’s experiment to wean Europe’s biggest economy off nuclear and fossil fuels and push it into renewables is at risk because generous subsidies have proved so popular with investors in green power that the country is straining under the cost.

While a boom in renewables has boosted supply and led to a fall in wholesale power prices, the incentives, or feed-in tariffs, are paid for by end users via surcharges added to their electricity bills. These charges mean German consumers pay the second highest power prices in Europe.

Powerful, export-oriented German industry has sounded the alarm and warned that its competitive edge is at risk. Some firms have even threatened to shift production abroad if the government does not act to reduce energy prices.

Merkel has long said that a reform of renewable subsidies, will be a top priority for a third term but it is a delicate balancing act to reduce feed-in tariffs to help industry, while ensuring investment in renewables does not grind to a halt.

Merkel’s ‘green revolution’ is widely seen as her biggest domestic policy and will be a crucial issue in any coalition talks which are expected to be long and difficult.

“The energy shift is a legacy issue for Angela Merkel. She has staked a considerable (amount) on it,” said Miranda Schreurs, director of Berlin’s Environmental Policy Research Centre and a member of a panel which advises the government.

After emerging victorious in an election on Sunday, Merkel is searching for a coalition partner. On energy, the SPD looks like a better fit than the alternative, the environmentalist Greens, and her outgoing partner, the Free Democrats (FDP).

“The FDP’s electoral loss could be a win for the energy shift,” said Schreurs.

The FDP, which failed to win enough votes to remain in parliament, has run the economy ministry for the past four years, acting as a brake on Merkel’s “energy shift”.

The FDP only reluctantly agreed to her decision to accelerate the nuclear phase-out in 2011 after Japan’s Fukushima disaster and, as a champion of the free market, wanted to scrap the subsidy system altogether.

The SPD, by contrast, introduced incentives for renewables more than a decade ago when it ruled in coalition with the Greens even though the SPD has deep roots in the coal industry.

The Greens, a less likely partner for Merkel’s conservatives, are against cutting renewables subsidies and have fewer qualms than the SPD about making industry pay.

Regardless of which partner Merkel ends up with, the departure of the FDP may also make it easier for Berlin to back EU plans to withhold some CO2 trading permits. Brussels hopes this idea, known as ‘backloading’, will save the Emissions Trading Scheme, the EU’s main tool to fight climate change.

Time is of the essence.

German industry, worried about competition from U.S. rivals enjoying cheaper energy because of the shale gas boom there, is threatening to move abroad if action is not taken fast.

Nearly two thirds of 2,000 companies surveyed by the Chambers of Industry and Commerce, or DIHK, said affordable energy was their top concern and called for radical reforms to subsidies.

The industry group BDI said on Monday reducing energy costs would be crucial for the survival of energy-intensive industrial companies, which account for nearly 1 million jobs.

The surcharge for feed-in tariffs, which pay producers a guaranteed price for green energy they provide to the grid for up to 20 years, has risen sharply in the last few years.

It shot up 47 percent this year alone – and is expected to increase further as more Germans install solar panels and invest in wind turbines. This, say Merkel and the SPD, is unsustainable for both households and industry.

“The conservatives and SPD agree … that the competitiveness of German industry is the most important thing,” said Famke Krumbmuller of the Eurasia Group consultancy. “With this in mind, they will address feed-in-tariffs.”

There are some exemptions from the surcharge, to help the steel, glass and building materials sectors, which are likely to be reduced overall, but under pressure from the industry lobby, the most important ones will stay, said Krumbmuller.

The trick will be not to reduce the incentives so much that investment in renewables stops. The government wants renewables to make up 35 percent of German power generation by 2020 and 80 percent by 2050 — from about 24 percent now.

The offshore wind industry, in particular, is clamouring for continued support as its expansion has proven more costly than expected.

The wind power industry association BWE said on Monday that if support for green energy is cut back too much, areas of Germany which have flourished due to new green investment would suffer. The sector accounts for 120,000 long-term jobs.

Schreurs said that feed-in tariff reform could include shortening the period of guaranteed payback to 10 instead of 20 years and a reduction in the price paid for photovoltaics or electricity derived from onshore wind.

To help ensure a reliable supply of power, there could also be a shift to what experts refer to as a ‘capacity market system’. This would ensure future supply by paying generators for their readiness to supply capacity rather than for the electricity produced.