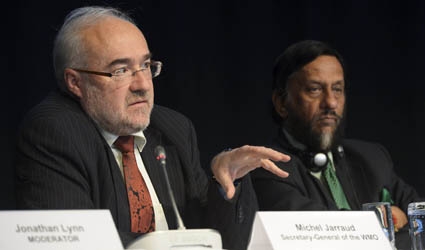 STOCKHOLM (Reuters) – Leading scientists said on Friday they were more certain than ever before that humans are the main culprits for climate change and predicted the impact from greenhouse gas emissions could linger for centuries.

The Intergovernmental Panel on Climate Change (IPCC) said in a report that the current hiatus in warming, when temperatures have risen more slowly despite growing emissions, was a natural variation that would not last.

It said the Earth was set for more heatwaves, floods, droughts and rising sea levels that could swamp coasts and low-lying islands as greenhouse gases built up in the atmosphere.

Many world leaders called for stronger action to rein in rising greenhouse gas emissions and limit a rise in temperatures to within manageable limits after the report, which estimated that humanity has burnt more than half the available carbon.

The study, meant to guide governments in shifting towards greener energies, said it was “extremely likely”, a probability of at least 95 percent, that human activities were the dominant cause of warming since the mid-20th century.

U.N. Secretary-General Ban Ki-moon said the study was a call for governments, many of which have been focused on spurring weak growth rather than fighting climate change, to work to agree a planned U.N. accord in 2015 to combat global warming.

U.S. Secretary of State John Kerry said the report was a wake-up call. “Those who deny the science or choose excuses over action are playing with fire,” he said, referring to sceptics who question the need for urgent action.

They have become emboldened after temperatures rose more slowly over the last 15 years despite increasing greenhouse gas emissions, especially in emerging nations led by China.

European Climate Commissioner Connie Hedegaard said it was time to treat the Earth’s health. “If your doctor was 95 percent sure you had a serious disease, you would immediately start looking for the cure,” she said.

Compiled from the work of hundreds of scientists, the report faces extra scrutiny this year after its 2007 predecessor included an error that exaggerated the rate of melting of Himalayan glaciers. An outside review later found that the mistake did not affect its main conclusions.

The report said the trend of the past 15 years was skewed by the fact that 1998, at the start of the period, was an extremely warm year with an El Nino event in the Pacific that can disrupt weather worldwide.

It said warming had slowed “in roughly equal measure” because of random variations in the climate and the impact of factors such as volcanic eruptions, when ash dims sunshine, and a cyclical decline in the sun’s output.

Still, the report said the climate was slightly less sensitive than estimated to the warming effect of carbon dioxide.

The IPCC reiterated that a warming trend is “unequivocal”, and some effects would last far beyond the lifetimes of people now alive, such as heat penetrating ever deeper into the oceans.

The report said temperatures were likely to rise by between 0.3 and 4.8 degrees Celsius (0.5 to 8.6 Fahrenheit) by the late 21st century. The low end of the range would only be achieved if governments sharply cut greenhouse gas emissions.

And it said world sea levels could rise by between 26 and 82 cm (10 to 32 inches) by the late 21st century, driven up by melting ice and an expansion of water as it warms, in a threat to coastal cities from Shanghai to San Francisco.

That range is above the 18-59 cm estimated in 2007, which did not take full account of Antarctica and Greenland.

“Scientists have confirmed what farmers in poor countries around the world have been telling us for years, that changes to their climate are destroying their livelihoods, ruining crops, hitting incomes, food quality and often their family’s health,” said Winnie Byanyima, executive director of the charity Oxfam.

About 15 protesters outside the conference hall dressed in lab coats as doctors carried placards saying “Climate Change: The debate is over.”