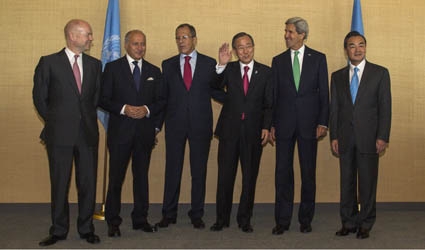 UNITED NATIONS (Reuters) – Ending weeks of diplomatic deadlock, the United States and Russia agreed on Thursday on a U.N. Security Council draft resolution that would demand Syria give up its chemical arms, but does not threaten military force if it fails to comply.

Samantha Power, the U.S. ambassador to the United Nations, said a deal was struck with Russia “legally obligating” Syria to give up its chemical stockpile and the measure went to the full Security Council in a closed-door meeting on Thursday night. U.N. diplomats said a vote could come within 24 hours.

“Just two weeks ago, tonight’s outcome seemed utterly unimaginable,” Power said. “Two weeks ago, the Syrian regime had not even acknowledged the existence of its chemical weapons stockpiles.”

“But tonight we have a shared draft resolution that was the outcome of intense diplomacy and negotiations over the past two weeks,” she said.

U.S., Russian, French and British diplomats told reporters the vote could come as early as Friday evening, provided the Executive Council of the Organisation for the Prohibition of Chemical Weapons in The Hague approves a plan for the destruction of Syria’s poison gas arsenal beforehand.

“I know that some (foreign) ministers are extending their stay in New York in order to participate in that vote,” Russian Ambassador Vitaly Churkin told reporters.

The agreement emerged from intense negotiations at the United Nations with Russia, Syrian President Bashar al-Assad’s chief ally. The aim was to craft a measure to require destruction of Syria’s chemical arsenal in line with a U.S.-Russian deal reached earlier this month that averted American strikes on Assad’s forces in the midst of a bloody civil war.

Western powers on the Security Council backed away from many of their initial demands, diplomats say, in order to secure Russia’s approval. Russian Foreign Minister Sergei Lavrov said an “understanding” had been hammered out, but gave no details.

A major sticking point had been Russia’s opposition to writing the resolution under Chapter 7 of the U.N. charter, which covers the council’s authority to enforce its decisions with measures such as sanctions or military force.

The compromise draft resolution, obtained by Reuters, makes the measure legally binding, but provides for no means of automatic enforcement as the United States, Britain and France originally wanted.

Power said the resolution was groundbreaking because the council, which has been deadlocked for years on the Syrian civil war, formally endorsed for the first time a plan for a political transition in Syria that was agreed on at an international conference in Geneva in June 2012.

The only reference to enforcement in the draft is a threat that if Syria fails to comply with the resolution, the council would impose unspecified punitive measures under Chapter 7, which would require a second resolution that Russia could veto.

A U.S. State Department official hailed the deal as a “breakthrough.”

“The Russians have agreed to support a strong, binding and enforceable resolution that unites the pressure and focus of the international community on the Syrian regime to ensure the elimination of Syria’s chemical weapons,” the official said.

Diplomats from the permanent Security Council members – China, Russia, the United States, France and Britain – had been haggling over the details of a resolution to back the American-Russian accord announced on September 14 in Geneva to eliminate Syria’s chemical weapons.

Assad agreed to destroy Syria’s chemical weapons amid an international outcry over a sarin gas strike in the suburbs of Damascus last month – the world’s deadliest chemical attack in 25 years.

Washington has blamed Assad’s forces for the attack, which it said killed more than 1,400 people, and President Barack Obama threatened a U.S. military strike in response.

Russia and Assad have blamed the attack on rebels battling to overthrow him in a civil war that, according to the United Nations, has left more than 100,000 people dead.

British Ambassador Mark Lyall Grant said he was pleased the draft resolution called for “accountability” for those responsible for the chemical attacks, although he added he would have liked a direct reference to the International Criminal Court in The Hague – something diplomats said Russia opposed.

In a speech to the U.N. General Assembly on Tuesday, Obama sought to persuade world leaders to apply pressure on Damascus with a resolution that included tough consequences should Assad not surrender his chemical weapons stockpiles in a verifiable way.

But by putting the Syria crisis back in the hands of the U.N. Security Council where Russia has the ability to block punitive action, the chances of U.S. military action appeared to recede even further. Obama faces tough opposition from a sceptical Congress and a war-wary public on the wisdom of intervening military in Syria.

With rebel forces plagued by divisions, the Friends of Syria – a bloc of mainly Western and Gulf Arab countries plus Turkey -followed up Thursday’s announcement of the draft resolution with a pledge to boost aid to the opposition. Weapons shipments to the rebels have been inadequate to shift the military balance in their favour.

U.S. Secretary of State John Kerry said on Thursday that Syria “will implode before any side would claim a military victory” and that all sides needed to move rapidly to put a political solution in place to end the conflict.

A senior U.S. official said earlier that the United States and China – another permanent Security Council member – strongly agreed on the need to quickly adopt a binding resolution on eradicating Syria’s chemical arsenal, a remark that appeared aimed at putting pressure on Russia to accept the measure.

Kerry met Chinese Foreign Minister Wang Yi for about an hour on the sidelines of the annual gathering of world leaders at the United Nations.

After the draft resolution was announced, the Chinese foreign minister said, “The major concerns of all the parties, including China’s concerns, have basically been resolved.”

China has backed Russia to veto three council resolutions since October 2011 that would have condemned Assad’s government and threatened it with sanctions.

Western diplomats say Beijing has little reason to support Assad but is eager to ensure Russia will continue to back it in the Security Council on issues like North Korea.

Assad’s government last week disclosed to a U.N.-backed weapons watchdog the extent of its arsenal, meeting the first deadline of the ambitious disarmament deal that calls for the weapons to be eliminated by June 2014.

Russian Deputy Foreign Minister Sergei Ryabkov said on Thursday that his country was ready to help guard Syrian chemical weapons sites and destroy Assad’s stockpiles but would not ship any of the chemical arms to Russia for destruction.

The head of the opposition Syrian Supreme Military Council cut short a visit to France on Thursday and said he would head to Syria on Friday for talks with rebel brigades that broke with the Western-backed coalition.

General Salim Idris, who commands the coalition’s military wing known as the Free Syrian Army, or FSA, said he would meet with fighters from the 13 groups that rejected on Tuesday the authority of the Turkey-based coalition.

The rebel groups, including at least three considered to be under the FSA umbrella, called on Tuesday for the rebel forces to be reorganized under an Islamic framework and to be run only by groups fighting inside Syria.

Thousands of Syrian rebels have broken with the Western-backed coalition and called for a new Islamist front, undermining international efforts to build up a pro-Western military force to replace Assad.