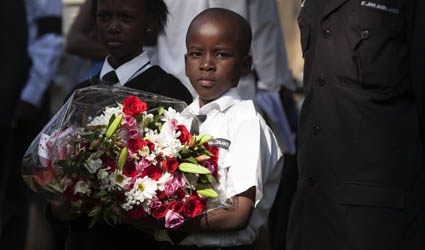 NAIROBI (Reuters) – Kenya is “at war” with Islamist militants who attacked a Nairobi shopping mall, the government said on Saturday as it faced questions about whether it had received advance intelligence warnings of the deadly strike.

A week after the raid on the Westgate shopping centre that killed 67 civilians and police and was claimed by the Somali militant group al Shabaab, the government has been trying to reassure Kenyans that it can protect them from further attacks.

Three Kenyan newspapers reported on Saturday that a year ago the country’s National Intelligence Service (NIS) had warned of the presence of suspected al Shabaab militants in Nairobi and that they were planning to carry out “suicide attacks” on the Westgate mall and on a church in the city.

In front-page stories, the Nation, Standard and Star newspapers questioned whether the Kenyan government and military may have failed to act on this and more recent warnings this year by local and foreign intelligence services.

“It is not a ‘yes’ or ‘no’ answer,” Mutea Iringo, principal secretary in the Ministry of Interior, told Reuters.

“What we are saying is that we are at war, and that every day some young Kenyan is being radicalised by al Shabaab to kill Kenyans,” Iringo said, calling on citizens across the east African nation to be alert and cooperate with authorities.

The newspaper reports emerged ahead of a meeting on Monday of the Kenyan parliament’s defence and foreign relations committee which is expected to ask security chiefs how much warning they had of Saturday’s assault.

In the mall attack that extended into a four-day siege, gunmen fired on shoppers and tossed grenades leaving a trail of victims and shocking Kenya and the world. Al Shabaab said it acted in revenge against Kenyan troops who have been fighting it in neighbouring Somalia for two years.

Britain’s government said on Saturday a sixth British national had been identified among those killed at the mall. French and Canadian nationals also died.

The Star quoted another NIS briefing in February warning of a gun and grenade attack in Kenya similar to a three-day killing spree by militants in the Indian city of Mumbai in 2008.

In an editorial, the Standard said the reports pointed to “obvious” security lapses. “It is becoming increasingly apparent that the country’s top security organs may have received adequate briefing on imminent terror threats,” it said.

“Why they did not act in time to save the needless deaths at Westgate is astonishing and dumbfounding,” it added.

The possibility that al Shabaab, which has carried out previous smaller gun and grenade attacks in Kenya, may be planning further high-profile strikes presents a major security challenge for President Uhuru Kenyatta, elected in March.

But the incident has also rallied foreign support for him as he confronts charges of crimes against humanity at the International Criminal Court in The Hague. He denies charges of orchestrating violence following Kenya’s disputed 2007 elections.

Five of the mall attackers were killed and Kenyan authorities say they are holding eight people over the raid, which confirmed Western and regional fears about al Shabaab’s ability to strike beyond Somalia’s borders.

It also dented Kenya’s vital tourism industry, although the finance minister says it will not have a long-term impact.

Kenyan officials have not so far specified the identities or nationalities of the attackers, saying forensic investigation of the wrecked mall building and of the dead will take time.

This has produced a deluge of unconfirmed speculation that radicalised diaspora Somalis from the United States and Europe may have been involved in the al Shabaab operation.

U.S., Israeli and European forensic experts are helping Kenya in the investigation.

A week after the attack, the five-storey, beige-coloured mall remained sealed off to the public. From outside, a spray of bullet holes was visible around one upstairs window.

A team of foreign officials wearing white protective clothing and yellow boots could be seen leaving the mall escorted by an armed man wearing a black flak jacket.

Kenyan and Western officials have said they cannot confirm speculation that Briton Samantha Lewthwaite, widow of one of the 2005 London suicide bombers, had a role in the mall attack. Some survivors said they saw an armed white woman.

Kenya requested a “red alert” wanted notice issued by Interpol for Lewthwaite, dubbed the “White Widow” by the British media, but said she was wanted in connection with a previous 2011 plot that was also linked by police to al Shabaab.

With the country’s security services on high alert, some Kenyans said they were worried that the government may have failed to act on prior intelligence information.

“It sounds like laxity. If you get warnings … you have got to listen to those warnings,” said businessman Vipool Shah.