All Blacks beat Pumas 33-15, within grasp of title 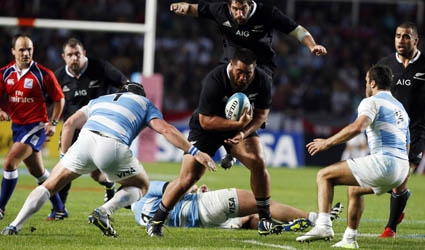 LA PLATA (Reuters) – Wing Ben Smith scored two tries, his second worth a bonus point, as New Zealand unleashed the power of their backs in the second half to beat Argentina 33-15 and all but secure the Rugby Championship on Saturday.

Barely 11-9 ahead at the interval after wing Julian Savea had run in their first try, the All Backs put the match beyond the Pumas with two more tries early in the second half from flanker Sam Cane and Smith’s first.

Smith earned the All Blacks the bonus point with his second try in the final move of the match to send New Zealand into the decider in South Africa next Saturday five points ahead of the second-placed Springboks, who beat Australia 28-8 earlier.

“I think that (bonus point) could be crucial. We worked very hard to get that in the end,” New Zealand’s captain Kieran Read said.

Flyhalf Aaron Cruden kicked 11 points to 12 for his opposite number Nicolas Sanchez, with centre Marcelo Bosch adding a penalty for Argentina from the halfway line.

The All Blacks, kept in check by strong Pumas defence, fed off scraps in the first half but managed to go in 11-9 up at halftime.

“(Argentina) came out firing and kept the crowd in it for that first half. We probably just weren’t there, but full credit to the way the Argentines came at us. It was a top game out there,” Read said.

Left wing Savea ran in the only try of the first half when he pounced on the loose ball after an Argentine high kick and raced away to touch down in the corner in New Zealand’s first incursion beyond the Argentine 22 in the 23rd minute.

Cruden was given a second chance with the conversion, after missing the first, because of encroaching by Argentina but he also failed with that effort from out by the touchline.

Sanchez had given notice of Argentina’s attacking intentions with a missed drop kick attempt in the second minute and they forced the All Blacks into mistakes that brought them penalties.

In the opening five minutes of the second half, Bosch put Argentina ahead again with a penalty from the halfway line but Cruden quickly restored the visitors’ lead.

The All Blacks then scored two quick tries as their piercing runs destabilised the home defence.

New Zealand scored their second through Cane after a concerted attack through several phase that took them across from left to right then back.

The backs finally had the extra man to pierce the defence with Ma’a Nonu slipping the ball to Cane to touch down in the corner before Nonu set up Smith with a delicately timed pass minutes later.

“They put a lot of pressure on us. We lost our discipline a little bit and that’s why they’re the best,” said Pumas captain Juan Fernandez Lobbe.

“We’re going to throw everything into this last game of the Rugby Championship,” he said looking ahead to the wooden spoon decider at home to Australia in Rosario next Saturday.

Argentina regrouped and kept New Zealand at bay until the dying seconds of the match.

“It was nothing more than we expected. They’re a side getting better all the time. They’re very good up front and tried to play a bit of rugby today and were quite good,” New Zealand coach Steve Hansen said.

Looking ahead to next Saturday, he added: “They’re going to have to play now and get the four tries and five points and that will suit us as much as it will suit them.

“We just have to recover well, enjoy the moment and get to South Africa and then get up for a big test match.”