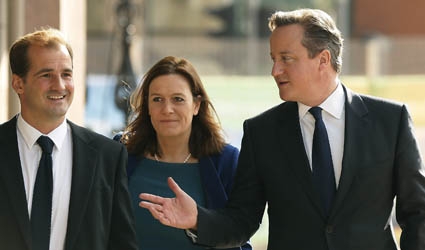 MANCHESTER, England (Reuters) – British Prime Minister David Cameron began setting out his stall for the 2015 election on Sunday by talking up a contested plan to boost home ownership and suggesting Britain may ditch Europe’s main human rights treaty, an object of hatred for Eurosceptics.

Seeking to reverse days of gloomy opinion polls before the start of his ruling Conservative party’s annual conference, Cameron said his decision to bring forward the government’s new 12-billion-pound mortgage guarantee scheme would be a shot in the arm for would-be home owners.

Rejecting criticism from political rivals and economists who say it risks stoking a housing bubble, Cameron made clear he plans to place the economy at the heart of the next election at a time when data suggests it is growing.

“The housing market is recovering, but from a low base,” Cameron told BBC TV in an interview, saying that RBS, NatWest, and Halifax, all part-owned by the state, would take part in the new scheme, due to start next week, three months early.

“Talk of a housing bubble to people here in Manchester or Salford and they would literally laugh in your face,” he added, arguing that the house price inflation seen in London and the southeast of England was not representative of the rest of Britain.

Cameron’s decision to bring the scheme forward by three months appeared rushed, with crucial details unavailable on the eve of its launch.

Trailing the Labour party by 11 points in the latest poll after Labour received a boost from its own conference, Cameron is trying to convince his party as well as voters that he can win outright in 2015 and govern alone, rather than in a two-party coalition, as is now the case.

He said on Sunday that the outcome of the next election was “wide open”, but that he had to win back centre-right voters who had drifted towards the UK Independence Party (UKIP), and to show voters he was helping them with rising living costs.

Labour has accused Cameron of delivering a slow economic recovery for the rich at the expense of the poor.

Real wages have fallen since Cameron took power in 2010 while inflation has pushed prices for everything from utility bills to transport fares higher, even as economic indicators have begun to pick up across the board.

Cameron said he had had to contend with a huge hole in the public finances left behind by Labour, which was in power from 1997 to 2010, while suggesting he would try to cut or freeze taxes, and look at “all markets” to ensure they were treating consumers fairly.

Cameron refused to match a promise by Labour leader Ed Miliband to freeze energy bills, however, ridiculing it and what he said were ill-considered Labour plans to raise taxes on big companies in a range of sectors.

“If you take his approach as a whole, it is anti-business, it is anti-enterprise, it is saying to companies that are investing in Britain: ‘I am going to put up your taxes’,” said Cameron. “It is nuts, frankly, to put up corporation tax.”

Cameron also moved to try to neutralise what it emerging as one of the biggest threats to his re-election: UKIP.

With no lawmakers in the British parliament, UKIP, which wants Britain to leave the EU and an end to what it calls “open-door immigration”, has seen its support surge in opinion polls.

Surveys suggest it has begun to siphon off support from the Conservatives, notably in decisive “swing” constituencies that will help decide the 2015 election.

Under pressure from UKIP and like-minded lawmakers in his own party, Cameron has promised to try to renegotiate Britain’s EU ties and hold a referendum on its continued membership by the end of 2017 if he is re-elected.

On Sunday he went further, saying Britain might be forced to abolish the Human Rights Act, which since 2000 has made the European Convention on Human Rights, signed by the 47 members of the Council of Europe, enforceable in Britain’s courts.

A series of high-profile cases, such as that of radical cleric Abu Qatada, who resisted British attempts to send him to Jordan to face terrorism charges for more than a decade, have angered many voters and exposed successive governments to the accusation that they do not control Britain’s own borders.

In July, the European Court of Human Rights, which upholds the convention, angered British critics further, ruling that Britain had violated the rights of three murderers by jailing them for life with no prospect of release.

Asked if Britain should leave the Convention, of which it is a founding signatory, Cameron said: “It may be that that is where we end up.