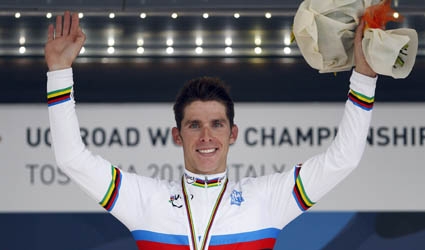 FLORENCE, Italy (Reuters) – Portuguese Rui Costa kept his composure in a tense finale to upset the favourites and win the cycling world championships road race following a series of crashes and persistent rain on Sunday.

After sitting behind and refusing to take turns at the front, Costa made his move some 1.5 kms from the finish to bridge the gap with Joaquim Rodriguez and beat the Spaniard in a sprint finish to become the first Portuguese to win the event.

Another Spaniard, Alejandro Valverde, took third place for his fifth podium at the event although he has never won the coveted rainbow jersey after a poor tactical choice possibly cost Rodriguez the win.

“My first concern was to stay safe because there was a lot of rain and make to the finish in one piece but in the end, when we were only a small group left in front I thought I had a chance,” Costa told a news conference.

“I stayed behind Rodriguez (ahead of the final sprint), played a tactical game and I was hoping that my legs would not fail me.”

Home favourite Vincenzo Nibali, who launched the decisive attack in the Fiesole climb despite being one of several riders to crash during the 272.3 kms race, had to settle for fourth.

The move left one-day race specialists Fabian Cancellara of Switzerland, Peter Sagan of Slovakia and defending champion Philippe Gilbert of Belgium stuck on the tarmac on the final of 10 laps on a 16.6 kms circuit.

About half of the peloton had already abandoned midway through the race and the whole British team had dropped out with five laps to go on a woeful day for Tour de France champion Chris Froome and his team mates.

“It was carnage out there. When you got into that second half of the peloton there were crashes everywhere,” said Briton Geraint Thomas.

“I saw at least five or six big crashes. As soon as that happens people lose the wheel on the climb and then you’re destined to get dropped.”

Multiple crashes and the Italian team’s pace at the front split the peloton but Sagan, Cancellara and Gilbert held on until Nibali attacked. He was followed by Rodriguez, Valverde, Costa and Colombia’s Rigoberto Uran, who was ruled out of contention when he crashed in a descent.

Rodriguez was the most active rider, attacking relentlessly but his moves were covered by Nibali, who however could not follow the Spaniard’s acceleration some three kms from the line on drying roads.

Costa, who served a five-month doping suspension in 2010 after taking a contaminated food supplement, stayed on the wheels of Valverde and Nibali, declining to take turns in the chase when prompted by the Giro d’Italia champion.

Costa, who this year won a Tour de France stage at Le Grand Bornand in gruelling weather conditions, left no chance to Rodriguez.

“I tried to play with his nerves but once he had caught me I knew it was over because I was so tired,” said Rodriguez, who could not understand why Valverde failed to cover Costa’s attack.

Former world champion Cadel Evans of Australia, as well as Ireland’s Dan Martin and Vuelta winner Chris Horner of the United States. pulled out after being involved in crashes.

Next year’s world championships will be held in Ponferrada, Spain.