Italian government breaks up after Berlusconi pulls out ministers 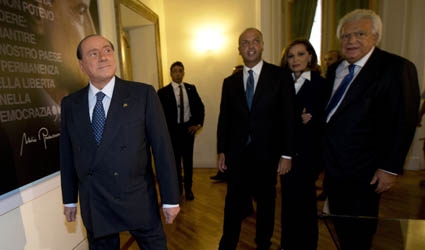 ROME (Reuters) – Italian centre-right leader Silvio Berlusconi pulled his ministers out of the cabinet on Saturday, effectively bringing down the government of Prime Minister Enrico Letta and leaving the euro-zone’s third-largest economy in chaos.

Talks will now start to find a parliamentary majority to back a new cabinet and avoid going back to an election just seven months after the last one.

The relentless political jockeying that has defined Letta’s five-month tenure has already thwarted efforts to push through important reforms Italy needs to emerge from a two-year recession, a decade-long economic lethargy, a 2-trillion-euro public debt and youth unemployment of around 40 percent.

The resignations will delay those reforms even further.

“So many measures we were working on now risk being set back,” Italian Labour Minister Enrico Giovannini told Rai state television. “On Monday our borrowing costs are going to rise by many points.”

Berlusconi’s move comes a day after Letta challenged the centre-right party to support him in a confidence vote in parliament.

Late on Friday, the cabinet failed to agree vital fiscal measures to bring the budget deficit within European Union limits, leaving the fragile coalition of traditional rivals from the left and right near total breakdown.

Tensions between the two sides had been rising for weeks following moves to expel Berlusconi from parliament after his conviction for tax fraud last month.

The Friday cabinet meeting had been intended to find funding to avert an increase in sales tax from 21 percent to 22 percent. That increase, which has been fiercely opposed by Berlusconi’s party, will now kick in from Tuesday.

“The decision taken by Prime Minister Enrico Letta to freeze government activities, and therefore setting off an increase in sales tax, is a serious violation of the pacts on which this government was formed,” Berlusconi said in a statement on Saturday.

Letta shot back later in the evening, accusing the former prime minister of telling a “huge lie” and of using the sales tax issue as an alibi for an action motivated by his legal problems.

Lawmakers from Berlusconi’s People of Freedom (PDL) party this week threatened to walk out of parliament if a Senate committee meeting on October 4 voted to begin proceedings to expel their leader, who turns 77 on Sunday, under legislation that bars convicted criminals from parliament.

Some opposition politicians called for early elections, but Deputy Economy Minister Stefano Fassina, from Letta’s Democratic Party, said he expected a new coalition could be formed.

“I don’t see elections. We won’t go to them, we will find a solution in parliament,” Fassina told La7 television. “I am sure there is a majority in parliament able to avoid elections.”

Letta has a commanding majority in the lower house, and if he can gain support from a few dozen Senators among the PDL or opposition groupings such as the anti-establishment 5-Star movement, he could form a new government.

Italian President Giorgio Napolitano, who has to either call new elections or oversee the creation of a new coalition and subsequent government, gave renewed signals on Saturday that he did not want the country to return to the polls.

“We need a parliament that discusses and works, not that breaks up every now and then,” Napolitano said during a visit to Naples.

“We do not need continuous election campaigns, we need continuity of the government’s actions, decisions and its measures to resolve the problems of this country,” he said.

The political convulsions have increasingly worried investors, although with the European Central Bank guaranteeing stability in the markets, there has so far been less panic than seen during previous crises.

The ECB’s next board meeting is on Wednesday.

Italy’s borrowing costs hit a three-month high at an auction of 10-year bonds on Friday, while the premium investors demand to hold Italian government debt rather than German paper widened to about 267 basis points from under 250 at the start of the week.

“We are paying for our political instability,” Labour Minister Giovannini told Rai.

As of Friday, Italy has raised around 81 percent of its funding target of 470 billion euros for the whole year.