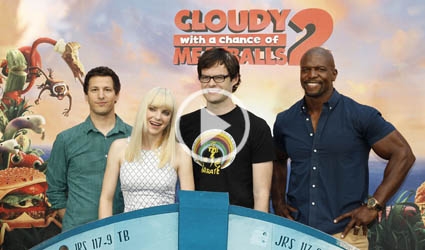 LOS ANGELES/NEW YORK (Reuters) – The sequel to “Cloudy with a Chance of Meatballs” devoured the weekend box office competition.

The animated 3D “Cloudy With a Chance of Meatballs 2,” which tells the story of monster-sized fruits, vegetables and cheeseburgers that come to life as “foodimals,” earned $35 million (21 million pounds) at U.S. and Canadian theaters, according to studio estimates on Sunday, easily beating all competitors.

The “Cloudy” sequel features the voices of Bill Hader and Anna Faris and is a follow-up to a 2009 hit that saw the fictional island of Swallow Falls attacked by giant food that plunges from the sky. In the new installment, the food comes to life and evolves into “foodimals” that include a hippopotamus, eggplanatee and cheespider, a cheeseburger with sesame-seed eyes and french-fry legs.

Some forecasters projected “Cloudy 2” would gross up to $45 million, though Sony said it expected a lower debut of between $30 million and $35 million. The movie cost $78 million to produce.

“We knew that people really loved the film from our early screenings, and it’s one of those times that the sequel is better than the first one,” he said.

Bruer also predicted that the film would resonate with audiences overseas, saying: “I’m certain it’s going to do even better internationally.”

“Rush,” from Oscar-winning director Ron Howard, tells the story of the 1976 battle for the Formula One racing championship. Chris Hemsworth stars as Englishman James Hunt and Daniel Bruhl as his rival, Austrian Niki Lauda.

The movie expanded to nearly 2,300 theaters after a very limited debut a week ago. It was produced for $38 million by Cross Creek Pictures and Exclusive Media and distributed by Universal Pictures, a unit of Comcast Corp.

Nikki Rocco, president for domestic distribution at Universal Pictures, said: “Although we started out on the low end of where we thought we would be, strong exit polls and good word-of-mouth will help it find its niche in the weeks to come.”

“Rush” won strong reviews from critics with an 88 percent positive rating from compendium website rottentomatoes, and an A-minus grade from CinemaScore, which polls moviegoers.

“Prisoners,” starring Jackman as a father on a desperate search for his missing daughter, brought its domestic sales total to $39 million after two weekends. The movie, which topped box office charts when it debuted a week ago, was released by Warner Bros., a unit of Time Warner Inc.

New romantic comedy “Baggage Claim,” distributed by Fox Searchlight, a unit of 21st Century Fox and starring Paula Patton as a woman on a 30-day quest to find a mate, finished in fourth place with $9.3 million.

Raunchy comedy “Don Jon” debuted in the weekend’s No. 5 spot with $9 million. The movie stars Joseph Gordon-Levitt as a young man whose pornography addiction interferes with his relationship with a young woman, played by Scarlett Johansson. Gordon-Levitt also wrote and directed the film, which Relativity Media acquired for $4 million.