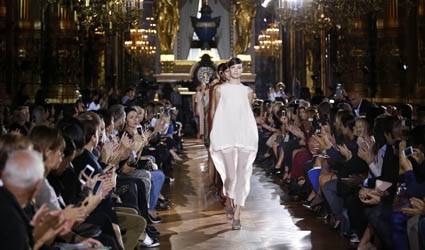 PARIS (Reuters) – Transparent fabrics, fluid shapes and a smattering of daisies took to the runway at Stella McCartney’s ready-to-wear fashion show in Paris on Monday, as the British designer sought inspiration in easy, airy looks for summer.

McCartney is known for an understated approach, and her Spring/Summer 2014 collection unveiled in the ornate setting of the Opera Garnier for Paris Fashion Week did not waver from familiar terrain.

Whether light-as-air low-slung trousers, slip dresses that floated or half-transparent skirts, the clothes in neutral shades as well as navy, rust and black were cut away from the body, imparting fluidity and fun.

Daisy prints, similarly used in the designer’s latest sportswear collection for Adidas unveiled earlier this month in London, took centre stage. Coat dresses, bustiers, and dresses with plunging necklines carried the tiny flowers in prints of black and white or red and white.

And for those who cannot get enough of spring flowers, McCartney paired a simple red and white daisy short-sleeved top with a flared skirt – covered with roses.

“There was a lot of handiwork, devores, jacquards, embroideries, tons of different ways to manipulate fabric,” McCartney told Reuters TV after the show, pointing to an embellished crocodile pattern as one example.

One goal was to make jacquards, textured fabrics whose intricate raised patterns often impart a heavy feel, “really light and airy, which isn’t so easy to do, and giving them a summer touch.”

In some of the most modern, streamlined looks, McCartney played with transparency and opacity, offering up skirts and dresses whose lower halves were see-through silk organza, bound loosely to the rest of the garment with a shiny satin strip.

Paired with body-hugging tops in cap sleeves, the looks paired sporty with chic.

The Stella McCartney brand is part-owned by luxury group Kering, formerly known as PPR. The company does not break out sales results of its smaller brands but said in July its overall luxury sales rose 9.4 percent in the second quarter on a comparable basis.

As at nearly every show, the designer’s father, former Beatle Paul McCartney, arrived late and sat in the front row, clapping loudly at show’s end.

“I’m proud of every collection, because she was my little baby in arms and she’s fantastic now,” he said.

“I don’t know much about fashion but I know what looks good. And this looks good.”