Merkel plans to talk with SPD and Greens on coalition 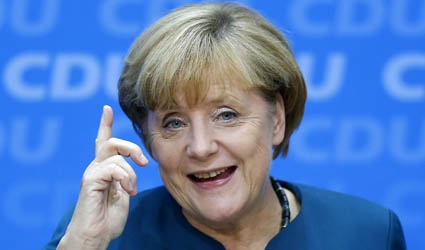 BERLIN (Reuters) – Angela Merkel will hold preliminary coalition talks with the Social Democrats (SPD) on Friday and also plans to meet with the Greens, as she tries to play her potential partners off against each other at the start of a tough horse-trading marathon.

The SPD are seen as the chancellor’s most likely partner, but they said on Monday they would not be rushed into a deal, suggesting the formation of a new government could drag on until January.

Germany’s European partners are watching the coalition manoeuvring in Berlin closely, concerned that delays could push back EU-wide decisions on important crisis-fighting measures like the ambitious banking union project.

“No one can say when we might get to the point where a government can be formed — it could be December or January,” said Andrea Nahles, general secretary of the SPD. “We won’t be rushed.”

There is deep resistance among SPD members to entering another ‘grand coalition’ with Merkel, after partnering with her in her first term and then plunging to their worst post-war result in the 2009 election.

Merkel’s outgoing partner, the Free Democrats (FDP), suffered the same fate. After four years as her junior partner, they were booted out of the German parliament for the first time since 1949.

Nahles said the talks on Friday would examine whether policy compromises were possible. Once these preliminary discussions were completed, a group of 200 senior SPD officials from across Germany would have to give a green light before the party entered more formal coalition talks with Merkel’s conservatives.

“I’d like to stress, that we can’t go back to the party with empty hands,” Nahles said.

The aim of the formal talks would be to agree a policy blueprint for the next government, as well as the allocation of top cabinet posts. At the very end, the SPD has said it will have to go back to its 472,000 grassroots members and seek their approval before agreeing to a coalition with Merkel.

This raises pressure on the chancellor to make compromises, but it also poses a major risk to the SPD leadership.

If ordinary SPD members were to reject a coalition deal negotiated by their leaders, party Chairman Sigmar Gabriel and other senior figures would probably have to step down.

A LOT OF NOISE

“We’ll have to gauge how serious the SPD are about negotiating, as so far they have made a lot of noise against a grand coalition,” Hermann Groehe, the general secretary of Merkel’s Christian Democrats (CDU), told reporters.

He said Merkel would sound out the SPD on Friday but also invite the Greens to preliminary talks next week. The Greens are seen as unlikely partners for Merkel, in part because the environmentalist party is in turmoil after winning a disappointing 8.4 percent of the vote in the election.

The result forced several veteran Greens politicians to step down, and the party is in the process of finding new leaders and rethinking its policy approach.

The conservatives and SPD appear headed for a showdown over tax policy and key cabinet positions, including the influential finance minister post held by Merkel ally Wolfgang Schaeuble.

Leading conservatives have sworn to stand by their campaign promise not increase taxes. The SPD campaigned on a platform of tax hikes for top-earners to fund improvements in infrastructure and education.

Neither the conservatives or SPD would name their demands on Monday. Nahles said the initial meeting on Friday would not discuss how to distribute cabinet posts, though media reports say the party could demand six, among them the finance ministry.

In a sign of concern that coalition talks could ultimately fail, forcing new elections, President Joachim Gauck has taken the unusual step of inviting party leaders for one-on-one talks.