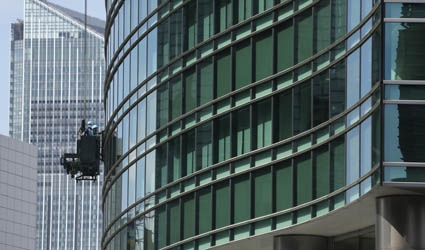 Workers stand in a cleaning gondola as they wipe the windows of a building in Tokyo's business district September 30, 2013. REUTERS/Yuya Shino

TOKYO (Reuters) – Japan’s Prime Minister Shinzo Abe took a step on Tuesday that none of his predecessors had managed in more than 15 years – making a dent in the government’s runaway debt.

Abe, riding a wave of popularity with economic policies that have begun to stir the world’s third-biggest economy out of years of lethargy, said the government will raise the national sales tax to 8 percent in April from 5 percent.

But at the same time he will soften the blow to the nascent recovery. As the tax increase is set to raise an additional 8 trillion yen ($81.42 billion) a year, Abe will also announce an economic stimulus package worth 5 trillion yen or more, according to a final draft seen by Reuters.

A source involved in the process said the size of the package could increase somewhat, depending on how some corporate tax issues are dealt with.

The tax increase marks the first serious effort since 1997 to rein in Japan’s public debt, which recently blew past 1,000 trillion yen ($10.18 trillion). At more than twice the size of the economy, this is the heaviest debt load in the industrial world.

Japan’s budget deficit is around 10 percent of GDP, huge for a country not in financial crisis. The debt pile grows every year by nearly the size of the combined GDP of Greece, Portugal and Ireland.

Yet, successive governments have done little to rein in spending and Abe is watering down the impact of the tax hike, so some critics doubt Tuesday’s move will be enough to get Japan on track to achieve its goal of halving the budget deficit – excluding debt service and income from debt sales – by the fiscal year to March 2016 and balance it five years later.

“It will just slow the pace of growth in outstanding debt and slow the pace of budget-deficit growth, but things would still be deteriorating,” Ogawa, the ratings firm’s Tokyo-based director of sovereign ratings, told reporters last week.

S&P could cut Japan’s rating if it does not shrink its budget deficit, he said.

Still, pressing ahead with the tax hike bolsters the image Abe has sought to foster of a decisive leader, withstanding opposition from his advisers and some of his own party.

“This plan was already in the works, but we have to give Abe some credit for following through with it,” said Hiroaki Muto, senior economist at Sumitomo Mitsui Asset Management Co.

Abe is seeking a difficult balance with massive fiscal and monetary stimulus to end 15 years of deflation and tepid growth, while setting the groundwork to get the government’s finances in order over time.

“Escaping deflation is my administration’s highest priority. We should realise that this will not be an easy task,” Abe told an economic advisory panel. “We also have to balance the need for an economic recovery with the need for fiscal discipline.”

Financial markets have given Tokyo the benefit of the doubt: the government can borrow 10-year money for less than 0.7 percent. But government officials and private economists have long feared a crisis in confidence in Japan’s creditworthiness that could cause a crippling spike in interest rates.

The tax hike is part of a package agreed last year by the previous government and the two current ruling parties. The increase to 8 percent is the first step in a doubling of the consumption tax – similar to a goods-and-services tax in other countries – over two years.

The law stipulates that the government must confirm that the economy is strong enough to weather the tax hike before proceeding. It posted the strongest growth among the Group of Seven powers in the first half, expanding at an annualised 3.8 percent rate in the second quarter after a 4.1 percent surge in the first.

And on Tuesday, the quarterly “tankan” survey of corporate sentiment from the Bank of Japan gave Abe the final economic justification to push ahead with the tax increase.

The closely watched survey found optimism surging among Japan’s big manufacturers, with the key sentiment index jumping to 12 from 4 in June, the highest since December 2007 and well above the forecast reading of 7.

Still, the tax increase is an economic and political risk.

Japan spiralled into deep recession after the sales tax was increased in 1997 to 5 percent from 3 percent. Economists are divided on how much the hike was to blame, as the Asian financial crisis and then Japan’s own banking crisis followed shortly afterwards.

Regardless of the economic impact, the tax increase became an enduring trauma for Japanese leaders after it helped end the political career of then-premier Ryutaro Hashimoto. Even the popular Junichiro Koizumi was unable to make significant headway on fiscal reform during his 2001-2006 term.

To ensure that the fiscal tightening does not derail the recovery, Abe ordered his government to compile the stimulus package to be announced on Tuesday.

It features public-works spending for the 2020 Tokyo Olympics, tax breaks to promote corporate capital spending and an early end to a corporate tax add-on that has funded reconstruction following the 2011 earthquake and tsunami, which will save companies 900 billion yen.

The stimulus could add 0.5-0.6 percentage point to economic growth in the fiscal year starting in April, but after that the impact is likely to fade away, said Sumitomo Mitsui’s Muto.

The package offers some goodies to individuals, such as aid to home buyers, but with the tax breaks mostly targeting companies and the tax hike directly hitting consumers, Tuesday’s steps bolster the view of critics that “Abenomics” favours corporate Japan at the expense of the little guy.

The stimulus offsets some two-thirds of the money being sucked out of the economy via the tax hike. This means the combined measures effectively resemble proposals from some of the premier’s reflationist advisers: to raise the tax by just 1 percentage point instead of 3 to protect the recovery.

Still, any improvement in government revenue from the tax increase is likely to be quickly overwhelmed by expenditures in a country where a rapidly ageing society and generous public services are blowing an ever-bigger hole in the budget.