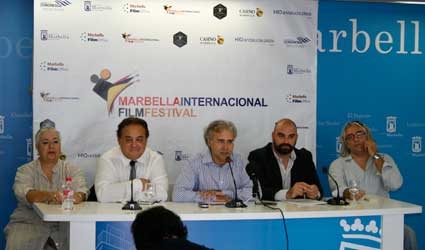 CINEMA fans who want a taste of something new and different should get down to Marbella this week.

The eighth edition of the Marbella International Film Festival is being held until Sunday at the Marbella Trade Fair and Congress Centre (Palacio de Congresos), where there will be two screens showing films throughout the day.

Other events are being held at the H10 Andalucia Plaza Hotel, the Marbella Casino and other locations throughout the city.

It is hoped that the event will not just showcase emerging film talent, but give a boost to the city and the Costa del Sol.

The official presentation of the Film Festival was held at MarbellaCity Hall earlier this week.

The Councillor for Tourism, Jose Luis Hernandez, explained that there had been more than 800 films presented for the festival, of which 40 were chosen for screening.

The presentation was also attended by film director and Director of the Marbella International Film Festival, Mac Chakaveh; the coordinator of the festival in Marbella, Joanne Frisa; the coordinator for Spain, Marcos Rodriguez, and local producer, Juan Carlos Olivo.

Hernandez pointed out that the festival is a private initiative which started out as a purely professional event to help actors and directors get ahead in the world of film-making. However, it can be considered of huge public interest to Marbella and brings many values to the city which encouraged the local council to support the initiative and take part in its organisation.

The festival is important for Marbella, he said, because on one hand, it helps to promote the image of a creative and dynamic location which is what the world needs to see, and on the other, it boosts the work of the Marbella Film Office, a department which the city hall created three years ago.

So far, the film office has helped to produce 300 films in Marbella, putting it at the top of the list of locations for such types of activities.

Meanwhile, Marcos Rodriguez thanked the city hall and Marbella Film Office for their collaboration and pointed out that the festival and the town are promoted in major cities throughout the world such as London and Miami.

He also said that Marbella was a dream setting for directors, especially because of the locations and the facilities available. He said that the amount of light in the city also made it attractive because it makes filming easier and less expensive. “It’s the ideal place for any project,” he said.

Jose Luis Hernandez said that the Marbella International Film Festival would attract people from throughout the province and further a field, and that thanks to the extensive promotion it had received, tourists would be attending from throughout the world, which would mean a significant boost for the local economy. The aim is to promote the more cultural side of Marbella.

Screening the films for the public to see for free means that this year, people will be able to get more involved with the festival, which will also promote Marbella abroad.

He pointed out that the films would be shown in their original languages with subtitles in English or in Spanish, and that there would also be parallel activities such as an art exhibition at the Palacio de Congresos, workshops and industry networking as well as social events.

To rate the films which are shown, there will be a panel of experts, but the awards, which will be handed out at a final gala dinner and award ceremony on Sunday will not only be based on their opinion, but also on that of the public. With their tickets, each viewer will be given the chance to rate the films and vote for their favourite. Each of the screening rooms has capacity for around 200 people.

The Marbella International Film Festival will bring some of the world’s most talented film makers to the city and showcase films from different parts of the globe. It will include the screening of films from the USA, UK, Russia, Austria, Italy, Spain, Germany, France, UAE, Hungary, Australia and Albania.

The festival, which was first launched in 2006, is the flagship project of New World Trust, an organisation created to provide support for talented artists.

Access to capital or identifying the financial backers are often the hardest obstacle for artists wishing to embark upon a new venture.

The objective of the trust is to provide start up capital for independent art projects. The support system includes assistance in marketing, project and financial management, business angles, agents and distribution networking, and trying to overcome any other obstacles which potentially hinder the artist’s ability to create. The Euro Weekly News is proud to sponsor the event and act as Official Media Partners.

One of the most important and awaited elements of the festival is the annual 24 Hour Film Challenge. The event offers a great opportunity for filmmakers to add to their credits and demonstrate their talent to world audiences.

Over the years, the 24 Hour Film Challenge has attracted many talented film makers, who have created some outstanding work, all scripted, shot, edited, and submitted for screening in only 24 hours. So if you are in Marbella on the day it is taking place, don’t be surprised to see teams rushing around with cameras, filming equipment and maybe even asking you to be an extra in the production.

This year, the Festival is aiming to increase participation by offering the challenge on-line, as well as on-location, thus allowing film makers from all over the world to make movies and show off their talent.

This is not just a great opportunity for artists to get ahead in the tough world of film-making, but also a unique chance for locals and visitors to enjoy a wide variety of short films, documentaries and feature-length movies in the unbeatable setting of Marbella.

To see the full programme of events and screenings and find out how to take part in the 24-hour film challenge, visit www.marbellafilmfestival.com.