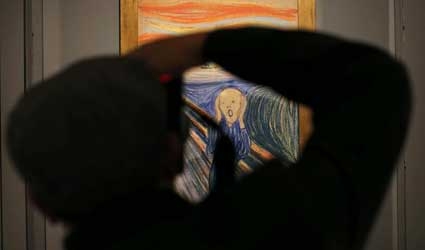 ZURICH (Reuters) – A major private collection of the graphic works of Edvard Munch, renowned for his haunting painting “The Scream”, goes on show for the first time on Friday at Zurich’s Kunsthaus museum, exploring his musings on the human condition.

“Edvard Munch. 150 Master Prints” displays works on loan from an anonymous private collector ranging from his first drypoint in 1894 to the Norwegian artist’s final lithograph just before his death in 1944.

Divided into sections depicting motifs such as “Angst”, “Melancholy”, “Vampire” and “The Kiss”, the lithographs, etchings and woodcuts shed light on how Munch refined the printing process and elaborated and reworked his subjects.

“We want to show the way he thought and the way he worked,” Ben Frija, a Norwegian art expert who co-curated the exhibition and connected the Kunsthaus with the private collector of Munch’s works, told Reuters.

Munch took up printmaking in the hope that it would be an easier way of making money than painting, writes art historian Gerd Woll in the show’s catalogue.

But the high material and printing costs as well as the expense of leasing the lithographic stones meant he ended up only making a few impressions of each print.

Opening the show are seven prints of the motif “Madonna”, depicting a woman whose naked body appears to be floating against a dark background. The print is surrounded by a border containing sperm and an embryo.

In the late 19th century, the lithograph’s title and content were highly controversial, and in one variation the border has been masked out and painted over by Munch, while in others the title has been shortened to ‘Monna.’

“You can see the evolution from the first imprint to the last idea,” said Frija, pointing out the transition from a faint drypoint to a bold lithograph with a bright red border and blue swirls crowning the woman’s head.

A black and white lithograph of “The Scream” is tucked away on a side wall near the end of the exhibition where it is sandwiched between two “Angst” prints, as the curators did not want it to draw too much attention away from the other works.

Among the other impressive works in the show are five prints of “The Sick Child”, which Munch believed was one of his most important motifs as it draws on his memories of his sister’s death from tuberculosis when he was a teenager.

Illness and death run throughout his oeuvre, but the complications of love are also explored through the motifs of “Attraction”, “Separation”, “Ashes” and “Jealousy.”

Zurich is no stranger to Munch: the Kunsthaus holds the largest collection of paintings by the artist outside of Norway.

The gallery also hosted a 1922 Munch retrospective displaying some 70 painting and 400 graphic works – one of the most comprehensive exhibitions of his graphic art.

The current exhibition at the Kunsthaus Zurich will run until January 12.