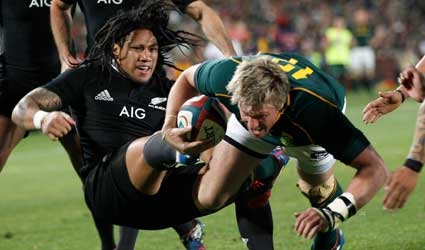 JOHANNESBURG (Reuters) – New Zealand retained the Rugby Championship title with a thrilling 38-27 victory over South Africa in Johannesburg on Saturday as they underlined their undisputed status as the world’s top ranked team.

The brilliant All Blacks were crowned champions after running in five tries through Liam Messam (2), Ben Smith, Beauden Barrett and Kieran Read.

South Africa needed to score four tries to have a chance of capturing the trophy but touchdowns by Bryan Habana (2), Willie le Roux and Jean de Villiers were unable to give them the win they needed.

The All Blacks matched the physicality and skill of the home team in a contest during which the lead regularly changed hands before the New Zealanders pulled clear in the final 20 minutes.

Richie McCaw’s team finished with six wins from six games in the annual competition with South Africa second, ahead of Australia and Argentina who complete the programme when they meet in Rosario later on Saturday.

The 62,000-seat caldron that is Johannesburg’s Ellis Park was packed to capacity for the tournament decider and it did not take long for the tone to be set for a memorable encounter with both teams showing plenty of endeavour with ball in hand in the opening exchanges.

Flyhalf Morne Steyn struck an early penalty for the Springboks but the lead lasted just moments as New Zealand number eight Kieran Read brilliantly combined with the elusive Smith who beat three defenders on his way to the opening try on 12 minutes.

The home fans were back on their feet six minutes later, however, when the powerful Duane Vermeulen broke through the All Blacks defence and put winger Bryan Habana away for the first of his two tries.

Habana’s second – a chip, chase and regather was a game highlight as South Africa surged 15-7 ahead midway through the first half.

But it would prove to be the experienced Habana’s last meaningful contribution of the match as he was forced off the field soon after with a hamstring injury.

As they have done so often the All Blacks responded to the mounting challenge and closed the gap to a point on 25 minutes when Messam barged over as the Springboks failed to defend on the edge of the ruck.

South Africa’s desperation for four tries proved costly in the dying seconds of the first 40 minutes as they lost the ball attempting to run it out of their own 22.

New Zealand punished them as Messam crossed to give the visitors a 21-15 lead at the interval.