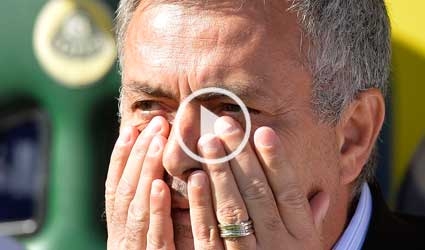 (Reuters) – Chelsea manager Jose Mourinho gave himself the credit as his substitutions paid off with Eden Hazard and Willian scoring late to grab a 3-1 win at Norwich City in the Premier League on Sunday.

The self-proclaimed ‘Special One’ is no stranger to talking himself up and he was not afraid to stick his hand up to say his risky tactic of throwing on more attacking power at the expense of a defender had won the three points.

Having taken a fourth-minute lead through Oscar, Chelsea failed to build on that and allowed their hosts back into the game with Anthony Pilkington’s 68th-minute equaliser.

Mourinho threw on Samuel Eto’o, Eden Hazard and Willian between the 73rd and 81st minutes and it paid dividends.

“If the substitutes come in and they change the game, the manager did very well,” Mourinho said on his club’s website (www.chelseafc.com).

“If they come in and they make it worse, the manager made a very bad decision. In the end I always think it is their responsibility.”

Hazard struck on 85 minutes after Chelsea broke quickly from a Norwich corner, the Belgian’s shot going over the line in almost slow motion after Ruddy had pounced on it but not stopped it.

Another counter-attack wrapped up the win a minute later as Willian curled in a scorching first-time shot on his league debut.

“The situation became difficult at 1-1,” Mourinho said. “We all knew that a point here would be a bad result for us. The whole team, not just the boys that came on, and they coped well with that pressure.

“Without losing totally the balance, we could risk a bit and try to bring to the game different things to see if Norwich could cope with that.

“I had to go with what I did. I had to put Eto’o, Hazard and Willian on, all three at the same time.”

He said the move could have backfired as he took off left back Ashley Cole in favour of more firepower.

“We could win, we could lose. At that moment we didn’t want the point, we played with three guys at the back with (Andre) Schuerrle open, Eden central to make three quick strikers. We lost a bit of balance to try to gamble and create,” he said.

“We left the road a bit open for Norwich too. If they scored a second goal, probably we lose. We are trying to be top so after one point at Tottenham (in a 1-1 draw last weekend), one point here today would be a bad result, so we tried to win.”

Victory lifted Chelsea to third place in the table with 14 points from seven matches. Arsenal are top of the standings on 16 points, ahead of Liverpool on goals scored.