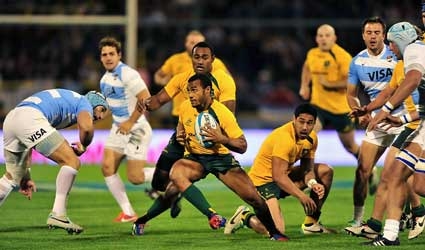 BUENOS AIRES (Reuters) – A different training schedule and a strategy rethink combined to power Australia to a thumping 54-17 victory against Argentina in the Rugby Championship on Saturday, according to Wallabies coach Ewen McKenzie.

The Wallabies ran in seven tries as they dampened centre Felipe Contepomi’s international farewell and dashed the Pumas’ hopes of their first victory in the southern hemisphere’s elite Rugby Championship.

“We had great playing conditions … we lost the toss for the sixth game in a row so we were staring down the barrel (but) we really played with purpose and showed some toughness at key moments,” McKenzie said.

“We trained differently in the week and spent time talking about how we wanted to play. The mindset was good and that transferred to the pitch,” he added at the post-match news conference without elaborating on the new training method.

Barring a tight 14-13 victory over the Pumas in Perth, Australia had lost their other matches in the tournament and came into Rosario on the back of a dismal 28-8 loss to the Springboks in Cape Town.

The team were further beset by internal strife, with talented back James O’Connor released from his national contract on Thursday after another bout of indiscipline.

One change to the side, bringing back scrumhalf Will Genia, sparked the recovery against a Pumas team that, just like their debut season in 2012, found the going tough in their sixth match of the tournament.

Australia served notice of their intent with a lightning start that brought the first of the three tries by fullback Israel Folau in the third minute and they never looked back despite the expected spells of Argentine dominance in the scrum.

“At times your need games like that when things come good, we’re very proud of how the group went about their work, it’s very pleasing to get a result (like that) on the scoreboard,” Australia lock and captain James Horwill said.

His Argentina counterpart Juan Fernandez Lobbe had no hesitations in admitting his team lost to a vastly superior side.

“They played a great match, great rugby, they were able to display the game they hadn’t managed in the previous matches in the tournament,” he said.

“They pounced on our loss of possession and failures in defence and then it becomes difficult to chase the score the whole match,” added the visibly dejected flanker.