Hamilton feels for the fans as Vettel wins again 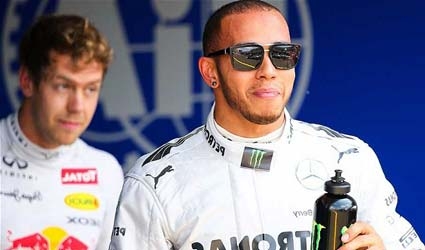 SEOUL, South Korea (Reuters) – Lewis Hamilton fears Sebastian Vettel’s Formula One dominance is becoming as much of a television turnoff for some fans as Michael Schumacher’s relentless success was a decade ago.

Red Bull’s Vettel is on the brink of a fourth successive title after winning Sunday’s Korean Grand Prix from pole position.

His fourth victory in a row gave the 26-year old German a lead of 77 points over Ferrari’s Fernando Alonso with five races remaining. If Vettel wins in Japan on Sunday, and the Spaniard is ninth or lower, it is game over.

“He has won already,” Hamilton, who was fifth for Mercedes at Yeongam on Sunday, told British reporters. “Unless he doesn’t finish the rest of the races, and even if he doesn’t he has probably still won it.

“Personally I feel for the fans because I remember the period of time when Michael Schumacher was winning,” added the Briton.

“I remember waking up in the morning to watch the start of the race and then going to sleep, and then waking up when it ended because I already knew what would happen. I am pretty sure a lot of people were doing that today.”

Hamilton, the 2008 champion, has won once this season, in Hungary, but Vettel has taken eight of the 14 races and is on course for his most dominant season since 2011.

That year he also triumphed in Suzuka with four races to spare and went on to end the season with 11 victories, a number only Schumacher, with 13 in 2004, has exceeded.

While fans in Germany and Italy always wanted Schumacher and Ferrari to win, there were many others who craved for more excitement and an end to what some sections of the media referred to as ‘Formula Yawn’.

Sunday’s race was deceptive, starting off with all the hallmarks of yet another familiar Vettel pole-to-flag victory parade but then exploding into something much more entertaining for the neutrals.

Peeling tyres, two safety car periods and the bizarre sight of a fire vehicle leading the field after Mark Webber’s Red Bull went up in flames made it something worth setting the alarm for.

Suzuka next Sunday will be another early start for European fans, with the added thrill of it being a potential title decider.

Vettel won in Japan last year, as well as the following round in India. The only one of the remaining races that he has not previously won is the U.S. Grand Prix in Austin, Texas, which made its debut last year with Hamilton winning for McLaren.

A record run of wins could be on the cards but Vettel said, as ever, that he was taking nothing for granted and focusing on one race at a time.

“I’m trying not to think about it, to be honest,” he said when asked about a fourth title. “Even though it looks very good, it’s still not over so we shouldn’t feel too comfortable.